Manchester UK firefighters found this tiny kitten on a table in a burning house, carried it outside, and gave oxygen at the scene.

Both crews from the Moss Side fire station in Manchester responded to a report of smoke coming from a house in Rusholme on the evening of March 29. Four firefighters wearing breathing apparatus went into the burning house and found the tiny kitten sitting motionless on a table.They brought it outside and revived it with oxygen

Blue Watch Manager Mark Brady said: “The cat came round and the crew almost got into an argument over who could look after it. A neighbor offered to take the kitten in, and did so. Kitty is said not to have belonged to the resident of the house and is now in the care of the RSPCA. The fire is blamed on a carelessness with a cigarette. 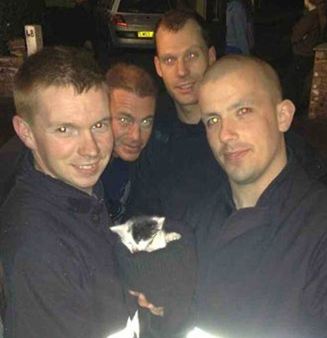