Five kittens were rescued and a man was charged with five felonies after a neighbor discovered the man had caught kittens on sticky rodent traps and thrown two of them into the garbage.

Police responded to a call about the incident at the home of 63 year old Murray, Utah resident Stephen Patrick Lacy on August 23 after the neighbor heard meows and discovered the two kittens in Lacy’s garbage can, stuck to traps and buried under leaves.

“Lacy said there were three more kittens in his carport that were also stuck to the traps,” a detective wrote in the probable cause statement. “[The responding] officer could hear the kittens meowing loudly and observed three kittens stuck to one trap,” the probable cause report for the charges states. “One kitten appeared to have a broken leg and another appeared to have its mouth stuck closed.”

Lacy reportedly told police he’d set the traps to catch wild or feral cats, saying he was trying to take care of a feral cat problem in the area, but later denied that and said he was addressing a rodent problem.

He told police he’d thought the two kittens he admitted to throwing into the garbage can were dead, saying they were not moving at all.

Lacy was charged on Tuesday, September 2 in Salt Lake City’s 3rd District Court with five counts of torture of a companion animal, a third-degree felony. His initial court appearance in the case is scheduled for September 23.

Ray Knuteson is the neighbor who found the kittens and saved their lives, and who called the police.

“I couldn’t believe it. I couldn’t believe it,” said Knuteson, who lives next door to Lacy and told reporters he eventually traced the kittens to the garbage can after hearing meowing for hours that Saturday morning without being able to locate the source of the cries.

When confronted by reporters from FOX 13 news at his home shortly after the incident, Lacy said: “I did not set the traps to catch kittens. ”

“I don’t want to do anything to cats or dogs in the first place,” Lacy said. “But if we’ve got mice or rats around we should be able to try to take care of them.”

“It made me sick,” Knuteson said.

The kittens were taken to a rescue group or shelter, or as one report says, a nursery, for care. Details on their whereabouts are not widely known.
. 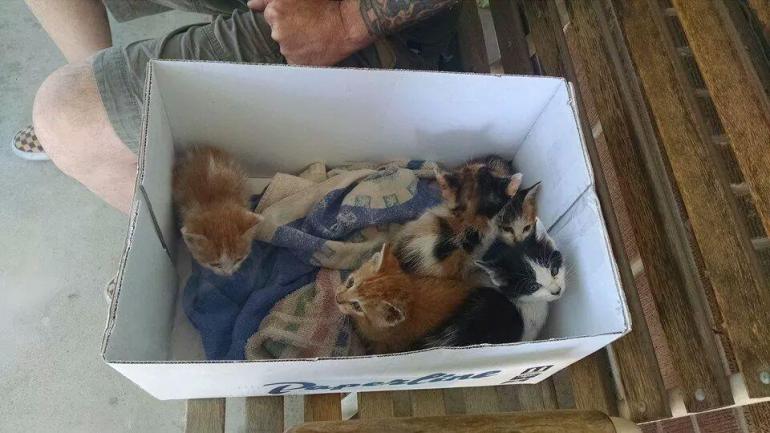