We reported yesterday that, under pressure from his family,  20 year old Riain Richards turned himself in to police on Friday morning after several people has contacted authorities to ID him as the person caught on CCTV video on October 29, dancing and twirling at a street corner while swinging a cat by the tail.

When making remarks on the case, Riain’s father Andrew let on that his son went to the police after becoming distressed at having his name spread all over Facebook in connection with the incident. This element is reminiscent of the Mary Bale cat in the bin dumping case, where she went to the police for protection after she was publicly outed as the dumper.

Our story, RSPCA thanks public and media as cat-swinger turns himself in, gives a rundown of the particulars, and includes a video with remarks by the cat’s petmom played over the actual footage of the incident.

Andrew Richards called the incident “sickening” and said that his son would “face the consequences” if found guilty of the attack . Speaking from the Camden arms pub in Ramsgate UK, he said “When I saw the footage I was appalled. I think cruelty to animals is disgusting and what happened to the cat is sickening, it is completely and absolutely wrong.”  The incident occurred outside of the Camden Arms pub, and the victim, Mowgli and his petmom Michelle Buchanan live close by.

The elder Richards said he does not know if his son is guilty, the youth is innocent until proven guilty, and Riain has left the area due to widespread disgust and outrage over his perceived guilt. Andrew Richards also discussed the youth’s difficulties after losing his mother. A read between the lines on his comments suggests that Riain has been a troublemaker.

When interviewed by police, with a solicitor at his side, Riain Richards denied guilt in the incident.

Ms. Buchanan has spoken about Mowgli’s trauma from the incident, making several comments about how he’s been affected. In addition to the comments we included in last night’s post, she has said,  “He’s had a terrifying ordeal.” and “He just sits on the bed and stares.”

If Facebook networking helped to prod the guilty party to go to the police and speak to them, then, well done.  richards has yet to be charged in the high profile case. 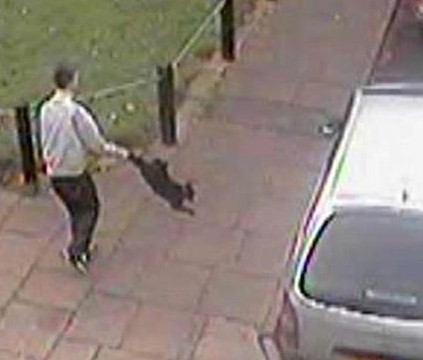