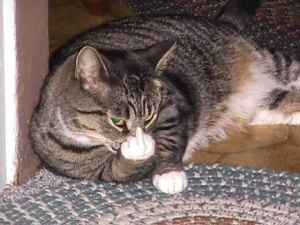 “Hello! And thank you all for the comments!! You all are making my recent break up much easier” … says Craigslist Guy to those of us who’ve read his amusing breakup post, sent him well wishes, and said we’d like a guy like that. He tells Life With cats readers what it has been like for him since he offered his girlfriend free to a good home when she told him to get rid of his cat companion of 11 years.

The Austin TX man posted in a roundaout way about his breakup on Craigslist, by publicly ditching the gal with great humor by offering her “free to a good home” in a listing that mirrors one that might have been used to give away a cat.

If you haven’t read his ad or want to visit it again, read Craigslist Guy Has The Right Idea for the delightful “Girlfriend says cat has to go!! Free tonight!!  post.

Now he tells Life With Cats readers what the experience of his ad going viral has been like, and how he’s faring.

Craigslist Guy aka username  “misder”  has checked in with us a few times since returning home from a getaway after making the now famous Craigslist post in the Austin TX  edition of the online bulletin board.

The poster, who more than a few ladies have admitted to having a little crush on, seems like a nice, friendly guy and says he appreciates all the messages and comments he has gotten in recent days.

He tells all of us who’ve read and commented at Life With cats:

“Hello! And thank you all for the comments!! You all are making my recent break up much easier. 😮 )

It has taken 2 days to read all the emails and not one person wanted her. This has been an amazing experience. I posted that ad for her cuz i knew one of (her) friends would see it, but this is so much better. I don’t think she even saw it, or has not yet…..

Oh and for any-one that is curious?? She is gone I don’t even know where she is staying. I left my phone and computer and went to the beach to meditate for the weekend. I came in late last night and had a few hundred e-mails to filter through.

Thank you all so much!! I did not even have a single hate mail. Everyone has supported me in this. 😮 )”

Craigslist Guy sounds like a pretty cool guy and we are happy to have crossed paths with him. As so many readers have said, he’s a good man for staying true to his cat and knowing who should stay and who should go when the ultimatum came.