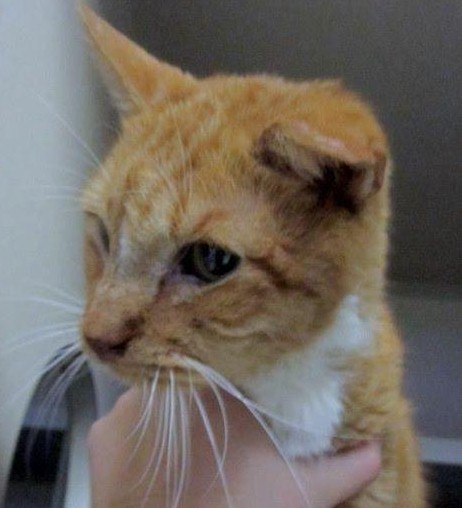 Clark Kent, the Philadelphia cat from Rescued cat found in gutter, family says they put him out because he acted sick and Update: The full story on Clark Kent, sick cat abandoned and found in gutter captured the public’s attention when James Buckley found him on Monday, skinny, weak, dehydrated and sick, unable to even raise his head, and saved him from an inevitable death in the gutter. Mr. Bucklet turned Clark over to Phila rescue organization City Kitties, which has assumed responsibility for his care and welfare, and eventual rehoming. Clark is receiving medical care and observation at the Cat Doctor, which works with the organization on a regular basis.

Clark is still weakened by extreme neglect and his experience on the streets, but is improving.  City Kitties reports that the PSPCA (Philidelphia Society for the Prevention of Cruelty to Animals) Humane  Law Enforcement division is investigating Clark’s family for abuse. The humane officer has the power to make arrests in such cases. City Kitties says that thanks to overwhelming interest in Clark’s case, and the generosity of many, they have all the money they need for his care, and they ask those who want to donate money for Clark to please give to PSPCA Humane Law Enforcement division instead. They advise, when making a donation to direct it to “Humane Law Officers”. The division is funded entirely by donations. Wednesday afternoon: A City Kitties volunteer visited Clark Kent this afternoon at  The Cat Doctor.  He’s resting comfortably, but not very responsive to attention. He is still cool to the touch and as you can see, is receiving a small amount of IV fluids–about as much as a kitten would receive, since he is anemic and the vet can’t risk diluting his blood. He is still clearly exhausted from his ordeal.

Backtracking a bit; on Tuesday Clark was found to have ingested something metal during his time spent scrounging to survive. Fortunately, Clark is expected to pass the object, which was found to be in his lower intestine. The doctor is relieved at this, saying they would not want to have to perform surgery to remover the object, due to Clark’s weakened state.