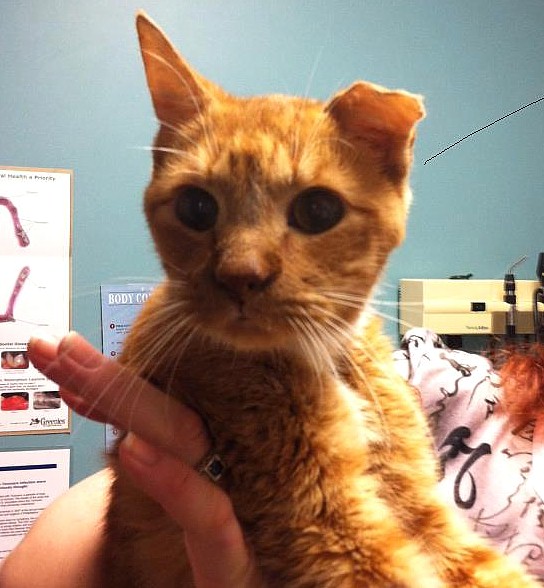 Clark Kent, the Philadelphia kitty found near death on the street last Monday is getting stronger and made his TV debut last night in a local channel’s news broadcast. Clark wanders around at The Cat Doctor’s offices while representatives from City Kitties and The Cat Doctor, joined by Clark’s rescuer James Buckley,  talk about Clark and his experience.

If you have not followed Clark’s story, or would like to revisit it, see the three earlier entries in our Index of stories on Clark Kent.

In their most recent update, from 11/26, City Kitties, the rescue responsible for Clark, writes at their blog that:

Clark Kent … has greatly improved.   He is eating, enjoying attention, and is exploring his surroundings on wobbly legs.  (He was too ill to hold up his own head on Monday, so this is a dramatic improvement).   While Clark Kent will need quite a bit of time to recover from months of starvation and neglect, we are cautiously optimistic that the immediate danger has passed.  He will continue to hang out at The Cat Dr. until he is in good enough health to finish his recovery in a foster homer and be adopted.

3 thoughts on “Clark Kent improves and is featured in a TV news segment, along with his rescuer and caregivers”