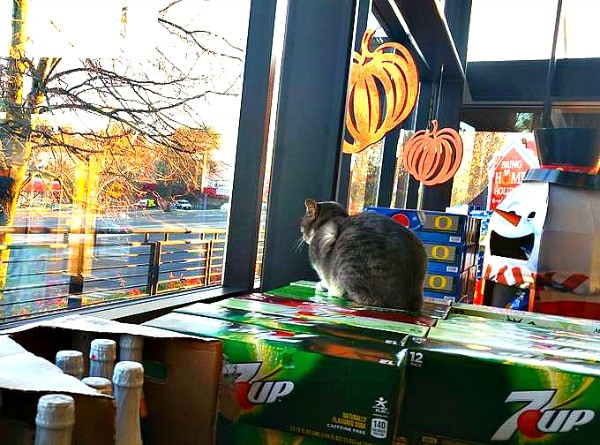 Not many folks can say the highlight of their weekly grocery shopping trip is seeing a cat, but for the folks of Portland, Oregon, who frequent the Southeast Portland Safeway, seeing him has become an expectation.  At least that was until Cecil was banned from the store.

Seems that someone at Safeway wasn’t happy with the cat’s meanderings and having been questioned by media as to the cause for his banishment, Safeway has yet to respond.

Cecil is so popular he has his own Facebook page.  Administrator, Vincent Barbarino, has posted two calls for action on the site.  One, to sign a petition at change.org encouraging the store to allow Cecil’s return and the other, asking citizens to take their own cats into the store as part of a protest effort, but not into any areas with open or prepared foods as the intent is not to create any trouble, just show solidarity for Cecil.

Of additional interest is that Cecil is by no means a stray.  He actually lives across the street with his person something Allison Traynor discovered when calling the phone number on Cecil’s tag, concerned he was lost.  No one picked up the phone, but the message began by stating if the person was calling about the cat not to worry.  Cecil just likes hanging out at the store and will find his way home when he’s done.

One Safeway patron, Ivo Bourgeois, believes that Cecil adds a little something extra to the shopping experience.  He and others actually look for the feline while picking up necessities, many taking photos and posting them.  Others admit to purchasing additional kitty treats while at the store for their own cats just to have some tidbits to share with Cecil on their exit.   Seems that Cecil may not only be responsible for bringing some cheer to an otherwise potentially drab excursion to pick up milk, but he may well be doing his part to pad the store sales in the pet aisle.

So as the cat lovers who shop at the Southeast Portland Safeway rally the troops on Cecil’s behalf, in spite of his being kicked out, Cecil doesn’t seem at all concerned.  He showed up again on Monday evening ready for his daily photo shoot.