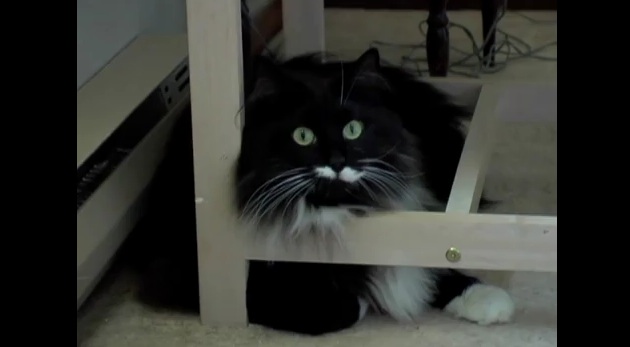 The extraordinary bond between humans and cats can be amplified when a life-threatening illness enters the picture.  Chuck and Luke each have a story that clearly demonstrates the ability of our feline companions to inspire us and sometimes just help us get through a day.

Chuck’s lucky day came when volunteers from United Paws of Tillamook found him wandering with a feral colony.  They noticed a large tumor on his neck and immediately brought him to a veterinarian for care.

The tumor was removed and the volunteers, finding Chuck’s demeanor more house cat and less feral, moved him to a foster home. In addition to cancer, 6-7 year-old Chuck experienced arthritis and was bow-legged. Although they hoped he’d find a forever home, the volunteers knew senior cats — especially ones with health issues — were difficult to place.

Chuck’s luck continued when a couple saw him at a United Paws adoptathon and fell in love with him. Both cancer survivors themselves, they felt an immediate connection with the the cat and his struggles.

Once a stray with a certain death sentence, Chuck is now a survivor and an inspiration. In fact, tonight he is the official mascot at the Neahkahnie High School Relay for Life Rally. Chuck’s adopters will be wearing “Chuck” buttons and lighting a luminaria for him. That’s one Lucky Chuck.

Sometimes friends enter our lives just when we need them most. This is the case with Karen Corey and her cat Luke (pictured above). In June of 2009, Karen was diagnosed with stage 3 breast cancer and underwent two surgeries and her first chemotherapy treatment. In August she met a stray cat wandering around her apartment complex. She took him in, gave him a home, and named him Luke.

During the difficult times of Karen’s ongoing treatment, the faithful Luke stayed by her side as a constant companion. No matter how she was feeling, he purred, helped her stay calm, and made the hard days go by more quickly. He never asked anything of her — he only gave.

According to a study by Purina, 84% of women with breast cancer say their cat companion had a calming effect on them and 73% said they thought their cat knew they were sick. Dr. Liz O’Brien, veterinarian and feline specialist, concurs with the findings and says that cats are emotionally attached to their human family members — if a family member is sick, the cat has an innate sense that there is something wrong.

Stories like Karen’s have inspired Purina to donate to the Canadian Breast Cancer Foundation for every purchase of a specially marked bag of food, with a donation goal is $100,000. For more information about Purina’s efforts, please visit their website.

0 thoughts on “Cats Provide Companionship and Inspiration to Cancer Patients”