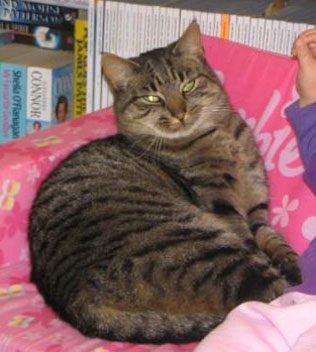 Jessie’s family moved 3000 km, or nearly 1900 miles, in March of last year, from South Australia’s Eyre Peninsula way up to Berry Springs, near  Darwin, to the North. The family flew Jessie up to live with them but left their other two cats behind with the new homeowners, thinking they would not adjust well to the move.

A few weeks after the move, petmom Sheree Gale thought Jessie had settled in to her new surroundings, but she disappeared soon afterward and was not seen again … at least not by Sheree Gale and her husband Andre.

More than a year after Jessie’s disappearance, Jenn Humby, the new homeowner of the Gale’s old house, noticed another cat hanging around with the two cats the Gale’s left behind. Jenn took a photo of the cat and sent it to Sheree, who confirmed that it was indeed Jessie. By everyone’s agreement, Jessie will stay at her old home and will live with her kitty silbings and the Humby family.

Sheree says that Jessie does not like to ride in cars, and she believes that her cat walked the entire way back to her old home and the two kitties she knew as her siblings. The journey would have taken Jessie through desert lands unless she took an extra-remarkable route along the coast. Jessie’s flight to the new home took her on a roundabout route going from Adelaide to Melbourne to Brisbane, and then to Darwin. Did she take that same route back home? As in all of these cases, the cat is not talking. For an idea of the distance, see the above map and use Darwin on the North coast and Adelaide on the South coast, both loacted roughly at center.