A young cat has found a happy ending after being thrown from a moving car.

Her owners had previously visited the Blue Cross rehoming centre in Bromsgrove, Worcestershire, UK but the cattery was completely full, so staff offered them alternative ways of finding the cat a new home.

But as the owners drove away and the stunned Blue Cross team looked on, they threw the cat from the moving car.

Nikki Halfpenny, Blue Cross Animal Welfare Assistant, said: “We had a funny feeling when they left and decided to watch what happened when they drove away.

“Shockingly, when they approached the end of our drive the car door opened and we saw the cat being thrown out. We couldn’t believe it – the car was still moving!”

Luckily, a member of the rehoming centre team was near enough to catch the terrified pet before she ran onto the nearby busy main road or became lost in the woods.

Staff named her Annabelle and she spent the afternoon in an office while they looked for emergency overnight accommodation.

As soon as space became available, Blue cross staff moved Annabelle into the centre’s cattery until her loving new home was found.

Nikki continued: “Annabelle is such a sweet, gentle and friendly cat it is tragic that she was discarded so carelessly. She settled in quickly with us and was her over ordeal fairly soon.

“We were delighted that she has finally found the happy home she deserves.”

So far this year, Blue Cross has taken 1,300 stray or deliberately abandoned pets into care. Plans are underway to rebuild the charity’s Bromsgrove site with the aim of helping double the number of needy pets in the future. 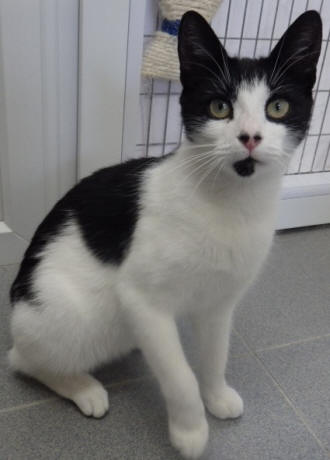