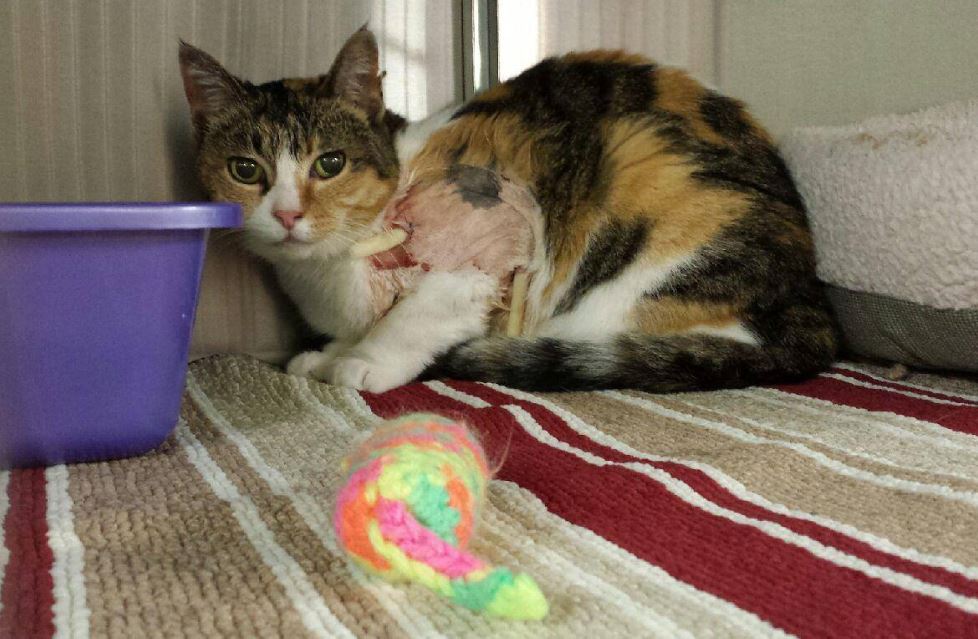 A pretty calico cat helped by a shelter and a vet after she was found shot by an arrow is back with her family again and on the mend.

Abilene, as she was being called, was found in a garage in Jefferson, Wisconsin on July 1 with an arrow sticking through her. She was rushed to the vet and came into the care of the Humane Society of Jefferson County, also in Jefferson.

The arrow was removed from the wounded cat, who was in pain but recovering well afterward.

Humane Society director Lisa Patefield was visibly affected by the cruel act against the pretty and friendly cat when she appeared on the news to discuss the case. Ms. Patefield said Abilene was obviously someone’s pet and she hoped her family would come forward.

Today the Humane Society of Jefferson County announced that Abilene’s owner had been fond and the cat has gone home to complete her recovery where she feels comfortable and loved.

Humane Society of Jefferson County wrote at their website after she’d been found, saying: “On the night of July 1st, a Jefferson resident found a calico cat in their garage that had been shot through the shoulder with an arrow. This sweet girl, now named Abilene, has no microchip and her owner has not filed a lost report with the shelter. We rushed her to Jefferson Veterinary Clinic for emergency care and she will require additional medical treatment.”

Humane Society of Jefferson County wrote at Facebook today with the happy update that the cat has been reunited with her owner, saying: “We are pleased to report that Abilene, the cat who was shot by an arrow, has been reunited with her owner! Nationwide, only 3-4% of lost cats are reclaimed by their owners, so this is an unexpected and extremely pleasant surprise. Abilene will feel much safer and less stressed in her own home, which should be very beneficial to her recovery.”

“The outpouring of concern has been overwhelming and we thank all the compassionate people who donated to help Abilene and/or contributed to her reward fund. The HSJC is committed to finding her abuser and is offering a $1,000 reward for information leading to an arrest and conviction. We are still accepting donations for this reward fund and are always in need of contributions to our Animal Medical Fund, which helps shelter animals with exceptional medical needs. Unfortunately, injured and abused pets are not uncommon and the need for support to care for these innocents is ongoing. On behalf of Abilene and the many other animals who rely on your kindness, thank you so very much for caring!”

The cruel act against the friendly cat brought out the best from many members of the community who donated for her care and gave their support. The Facebook post from the Humane Society of Jefferson County that we’ve shared at the bottom of this story shows a touching and heartwarming example of that community support for the wounded cat.

Humane Society director Lisa Patefield and the injured kitty are featured in this FOX 6 video report made before the cat was reunited with her owner.

The Humane Society of Jefferson County is accepting donations for Abilene’s care through “Abilene’s Reward Fund”.