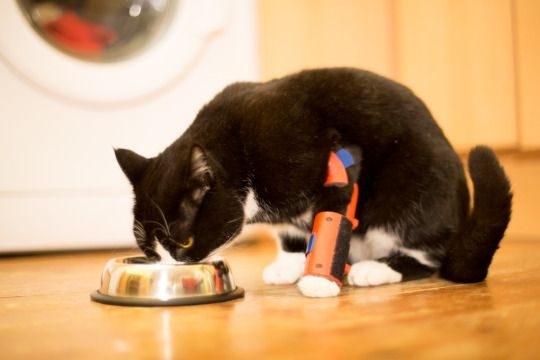 After a string of bad luck left the young cat, Sprocket, with nerve damage in his legs, his owner turned to a 3-D printer for a solution to the issue. Fergus Fullarton Pegg, a designer based in Glasgow, designed a 3-D printed brace which could help Sprocket recover from his nerve damage.

Sprocket was initially hit by a car and needed to have his leg wired as a result of the accident. However, while the cat was still healing, he was mauled by a dog just six weeks later. The attach caused nerve damage in his leg, restricting his movement.

It looked like the leg would need to be amputated, but Fullarton Pegg went to work and designed the leg brace for Sprocket. Sprocket’s vet approved the brace, and the hope is that Sprocket can recover and avoid an amputation.

But don’t worry – Fullarton Pegg is already working on a 3-D printed prosthetic leg in case amputation is necessary.