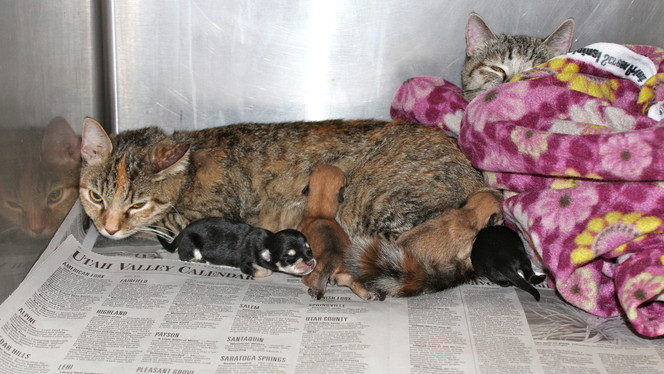 A Humane Society of Utah shelter cat nursed a litter of abandoned puppies and helped to save their lives.

“When the puppies came in, we weren’t sure how long they’d been without food, had been in that box left on the car,” Shepherd said. “We’re lucky the woman found the box when she did, because within three hours they could have easily starved to death.”

Shelter staff quickly placed the pups with a cat who’d recently nursed her own litter of kittens and had come in earlier that day with her pregnant sister.

Kitty was still lactating and was able to nurse the pups and give them the warmth and comfort of a mother’s presence.

The puppies were doing well with their surrogate mama until the pregnant sister kitty went into labor, and shelter staff felt that things were becoming too stressful for all the animals involved.

The puppies were then placed with the shelter’s foster department for round the clock bottle feedings.

“We basically looked at doing whatever we could to save these puppies,” Shepherd said. “It could go both ways. They’re young, we’re optimistic that they’re going to do well because they did feed yesterday, and we’ll just wait and see.”

“We’re lucky the woman found the puppies when she did and brought them to us, and we’re lucky that we had a cat here that was able to provide some milk. We think that might have saved their lives,” Shepherd said.

Watch the KSL report on the story: