Most everyone had someone in their neighborhood that fit the bill.  The Cat Lady.  She of the swarming throngs of animals that inhabited both interior and exterior of the house at any given time.  My Aunt Reta was one of them.  I remember as a child going into her home and being fascinated by all the cats. They were everywhere as was the food, including plates of raw liver, water bowls and litter boxes interspersed throughout as easily as the décor.  She knew every single cat by name, too.  I am pretty sure she had hundreds.  My mom says she knows there were at least 25. The people next door would probably agree with me in terms of number, but, then again, their cats hung out there, too.

It seems that being a cat lady if not at all a bad thing and, according to recent health studies, a good thing.  In a 2009 publication from the Journal of Vascular and Interventional Neurology, the research indicates that having a cat reduces stress, blood pressure, and, in turn, may result in reducing the risk of cardiovascular diseases.  Chances are most cat lovers already intuitively believed that supporting data or not.  Still, it is good to know that natural assumption is based in fact.  It’s probably safe to say that people with cats are less lonely, too, than those without a pet.

According to a Seattle Times report based on Neilsen Scarsborough data, Portland and Seattle were the top dogs, um, cats, in terms of percentage for single women who own one or more cats. The study was conducted from February 2013 to March 2015 surveying some 440,696 respondents from across the country on consumer behaviors and lifestyle. 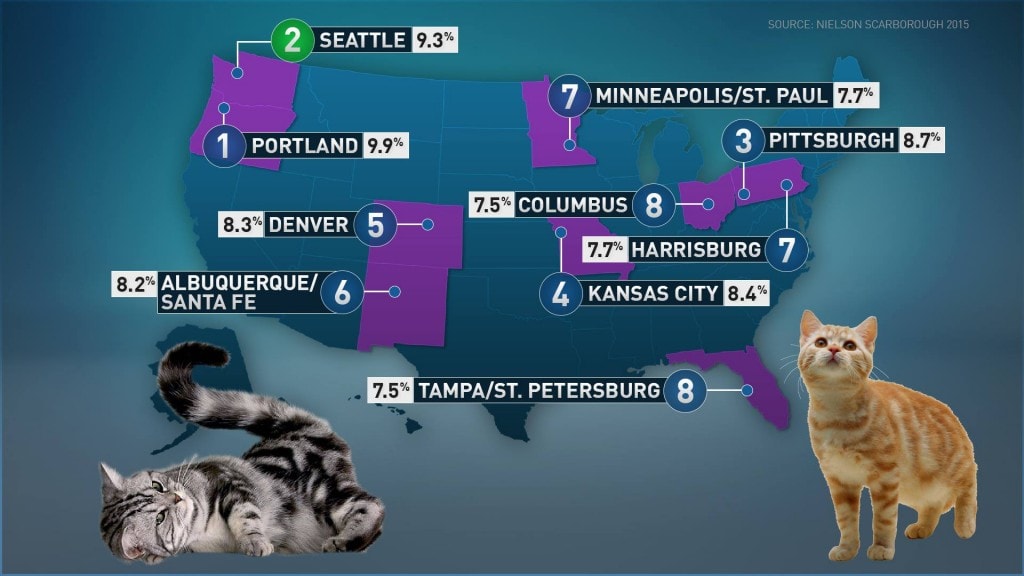 As a result, the following were listed as the top ten cities for women who live alone with a cat (although for anyone who owns a cat the word “alone” is relative):

Still it does make one wonder who these ladies are, although many of them seem to be hard-working, independent, go-getters like Jeanine Foucher, a 40-something single woman who lives with Nick, her cat.  She says she doesn’t have framed photos of Nick around, and while aware of the typical stereotype, of the spinster and homebody with few, if no, friends, she is clearly anything but having an active lifestyle fraught with exercise, friends, and, of course, her work.

To be fair, my Aunt Reta, would also not have fallen into that typical cat lady category.  While it was true she never married, she had her fair share of suitors.  She also went to work at an area newspaper almost every day until she passed, was active socially, and was a person to whom others turned when cats were found or unwanted.  It’s quite possible she was one of the earliest cat rescues in the Stockton area without knowing that was, indeed, what she was doing.  A progressive, modern, forward-thinking cat lady.

So here’s a nod to all cat ladies.  As it turns out, they are not only in your neighborhood, they live everywhere.