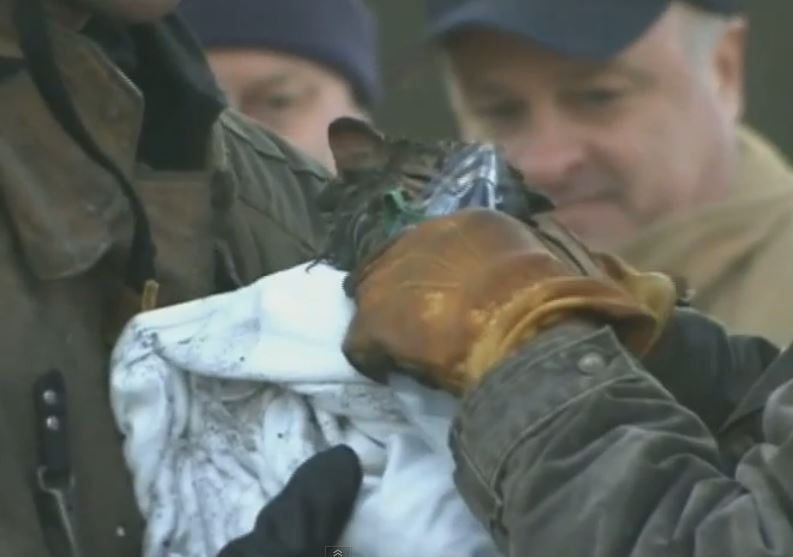 Marissa the cat remained in her burning home for nearly 4 hours before firefighters found her, then brought her outside and gave her oxygen through a pet oxygen mask. She is expected to be ok.

Firefighters in Mint Hill, North Carolina, near Charlotte, were nearly done battling an intense house fire burning for more than four hours Wednesday morning when one of them discovered the cat who miraculously survived the blaze stuck in a wall.

“One of our guys was walking around the house, which was almost completely collapsed, when he heard a meow,” Mint Hill Fire Chief David Leath told ABC News today. “He pried one of the outside walls and found the cat stuck inside.”

Firefighters brought Marissa outside and gave her oxygen at the scene before sending her to the vet at Sycamore Animal Clinic.

“The cat was then taken to a local vet,” Leath said. “I paid a visit today, and it was meowing still and everything. The vet said she’s on a 24-hour watch and she was doing well. The cat is expected to recover from smoke inhalation, a couple burn marks and an injured eye.”

Marissa’s family narrowly escaped the fire, which started as a vehicle fire the garage or driveway at about 3:30 am. A young man alerted his family to the fire in time for them to get out before the house exploded.

Neighbors said they heard a loud boom and felt the explosion.

“We could see the flames in the garage, about 15 to 20 feet up above,” said a neighbor who witnessed the fire. “We could see all the trusses burning in the garage and throughout the house. The whole house was glowing.”

While Marissa has some injuries from the fire, her survival is remarkable.