So your cat watches you a lot, pretty much all the time, and has a weird way of looking at you from behind curtains. But is he really spying on you? Or conspiring against you? Not to worry. Most cats find their humans fascinating and like to follow them into the bathroom for no apparent reason. But one man who actually thought his cat was part of a conspiracy against him has been written up in a medical journal and Discover Magazine blog as a rare case of what is being referred to as “cat-gras syndrome.” 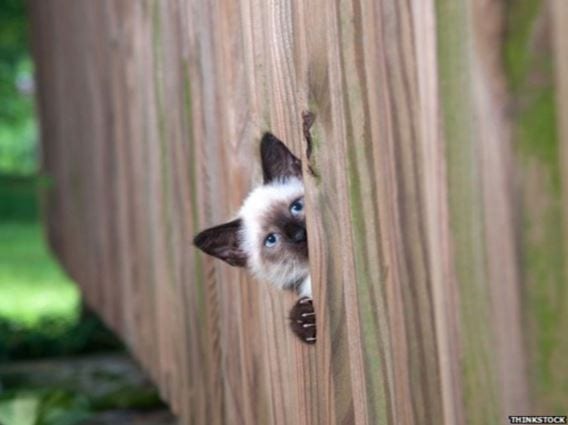 That’s a quasi-humorous take on a highly unusual disorder known as “capgras syndrome,” in which the sufferer becomes convinced that someone close to him has been replaced by an impostor who is part of a malicious conspiracy. Cat-gras syndrome is the name originated by Harvard neurologists R. Ryan Darby and David Caplan, the authors of a new paper in the journal Neurocase in which Darby and Caplan describe the strange case of a man who came to believe his cat was not his cat at all, but an impostor.

The unidentified 71-year-old man was a heavy drinker with bipolar disorder and a former hockey player who had taken some hard blows to the head, according to the write up in the Discover Magazine blog. The extent of his psychological problems became evident when he told his wife that their house was being monitored and mistook random strangers for FBI agents.

The patient’s symptoms and suspicions about his cat went away when he was given medication. And apparently no one did any checking to see if his cat’s psychic core was intact. There should be no need to find out if your cat is really an impostor, as long as she’s always been in the habit of watching you while you sleep. Nothing creepy about that.