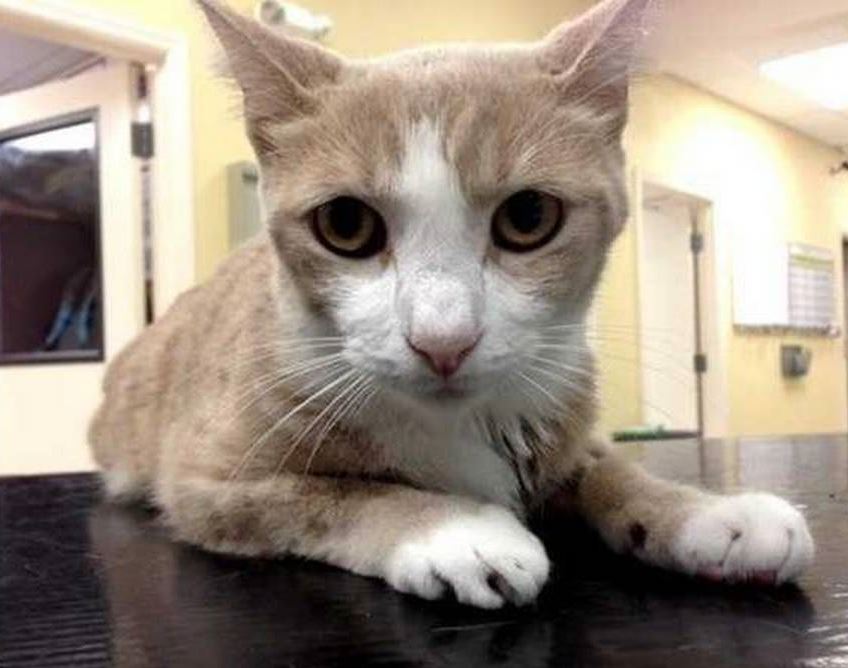 A severely anemic cat in Key West, Florida is doing well now after getting an emergency transfusion with dog’s blood.

Buttercup became abnormally weak and lethargic, prompting his owner, Bernie Saunders, to take him to the vet last month, where he was discovered to have a severely low red blood cell count. With no readily available compatible cat blood, and time being of the essence, Dr. Sean Perry from the Marathon Veterinary Hospital on Marathon Key ordered dog blood from a West Palm Beach dog blood bank with Mr. Saunders’ permission.

The transfusion between the two species is called xenotransfusion and, while rare, is something we have shared a story on before. It has reportedly been done at least 62 times, and cats are the only animals who receive blood from dogs. Cats lack antibodies against canine red blood cell antigens, so are able to accept the dog blood.  The procedure can only be used once on an individual cat because the cat develops the antibodies after getting the xenotransfusion and its system will thereafter attack the foreign blood.

“It’s a situation where you can’t give type A blood to a type B blood cat because it’ll cause a severe immune reaction,” Dr. Perry said. “It was actually safer to give the cat dog’s blood. It’s a practice that’s been used in the past but it’s not common.”

“Cat’s blood is a little harder to come by and not as available as dog’s blood,” Dr. Perry said. “We had greyhound blood packs that we get from a blood bank that has red blood cells separated from plasma. Buttercup showed no signs of rejection during the transfusion.”

Mr. Saunders says Buttercup has become active again and is taking steroids and antibiotics while having regular checkups at Marathon Veterinary Hospital to monitor his progress.

“Buttercup is at home and doing quite well,” Dr. Perry said. “What we try to do with transfusions is buy some time in order to get Buttercup’s bone marrow to kick into gear. Buttercup has developed red cells of his own now.”

It is not known why he became so anemic in the first place.

Mr. Saunders learned something about his cat during their first vet visit: “I found out he was a male instead of a female.”

“I let a charter guy’s daughter name it Buttercup. Personally, I just call him Kitty.”