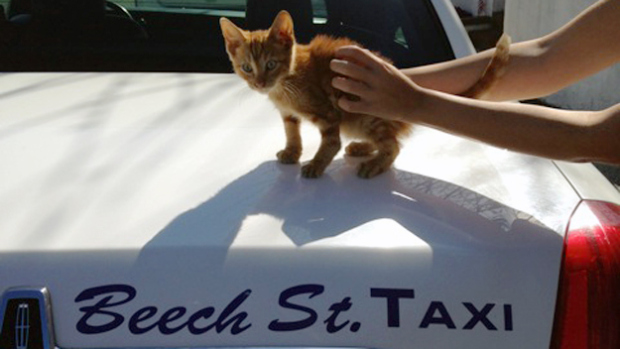 A cab driver stopped his car in busy highway traffic to save a kitten last Thursday. The kitten was rescued from danger and now has a home.

A Long Island, New York taxi driver came to the rescue of the kitten when he saw it stuck in highway on the Van Wyck Expressway in Queens.

Bill Cannon is co-owner of Beech Street Taxi in Long Beach and was driving home after visiting his sister in Queens Thursday afternoon. He was stuck in bumper-to-bumper traffic when he noticed the little orange tabby kitten on the traffic barrier.

“I was going by slow enough that I could hear it crying,” Bill told WCBS 880’s Ginny Kosola. “I stopped and jumped out and grabbed it and put it in the car. It was ready to jump into traffic when I jumped out of the car.”

Bill called his wife with a heads up before he returned home with the kitten.

“I said, ‘You’re either going to love me or you’re going to hate me.

“She sounded a little off at first and then once she saw the cat, forget it.”

The frightened kitten climbed under the dashboard of the cab and Bill had to remove part of the dashboard and coax the kitten out with cat food for about two hours when he got home.

Bill says he is an animal lover and told the interviewer he also has a 17 year old cat. He said his first intention was to find a home for the kitten but he decided to keep him when his 4 children met and fell in love with the little rescue.

Kitty has been named Autumn and was taken to the vet for a checkup. Autumn was limping a little bit after the rescue and had some blood on his nose that his family washed off. 2 thoughts on “Cabbie Stops In Traffic To Save Kitten”