Looking better and on the mend. Bow, the Grand Rapids, Michigan cat pierced by an arrow earlier this month has come a long way toward healing and recovery, as seen in this new photo.  As his medical history is discovered and shared, though, we get a better understanding of the life of this little stray who  has become so well known.

Bow, the former stray cat once known only to the neighborhood residents who kept an eye out for him and fed him, is now a famous cat. His fame comes under the worst sort of circumstances, though, as the victim of injurious abuse.

The story of how he was found wandering around pierced by an arrow and then taken for medical case and turned over to a rescue group while remaining at the veterinary hospital during his recovery can be found in our post  Arrow Pierces Cat: Justice For Bow , plus the followup posts Bow The Cat Shot By Arrow Recovers: Doctor Offers Reward and Reward Rises In Case Of Bow, Cat Shot By Arrow ; and the Facebook page Justice For Bow, where information on both Bow and his supporters’ efforts is regularly updated.

In short, Bow was a neighborhood stray or feral cat known and liked by the residents, who looked for him, fed him and describe him as a friendly fellow. He was found on May 10 with an arrow going through him and was brought to a vet for emergency treatment. He was then turned over to Carol Manos of Carol’s Ferals and transferred to Lowell Animal Hospital for followup treatment and monitoring during the recovery process by Dr. Bruce Langlois.  Meanwhile, supporters rallied round at his Faceook page and a reward was offered for the arrest and conviction of Bow’s assailant.

Now, Bow has finally had the unsightly drainage tube removed from his face and his fur is growing back where it had been shaved, so he looks more like a normal kitty on the road to recovery. He’s got a hearty appetite and is gaining weight, too. 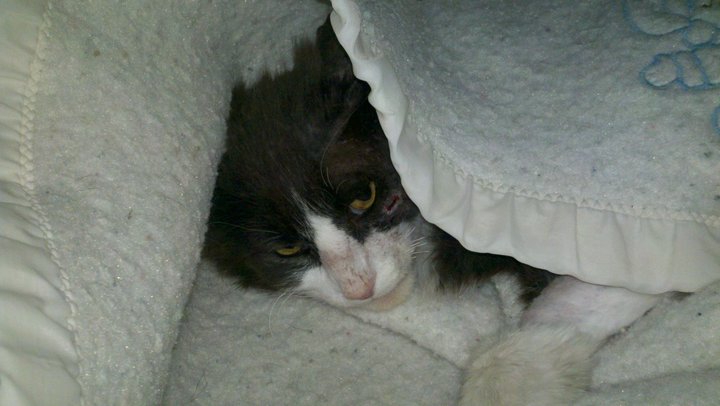 Bow snuggled in a blanket. Seems unremarkable, doesn’t it? Dr. Langlois noted that though Bow has had a blanket for several days he was so unaccustomed to life’s simple comforts that he would not lay on it or snuggle in it until last night. This is the picture of a little stray who has had a rough existence and for whom the life of a domestic cat  is very new and still strange.

Dr. Langlois has examined Bow thoroughly and, now that the immediate crisis has passed, has shared the details of his medical history. Bow has serious health issues, with two conditions that are sadly all too common in strays. Bow has FIV (Feline Immunodeficiency Virus) and toxoplasmosis.

So, this cat who lived all alone on the streets during his 7 or 8 years, with a bit of food and friendship coming to him from the humans living in his neighborhood has lived the difficult life known to thousands of cats on their own with no shelter, medical care or real domesticity. He was thin, unaccustomed to the simplest of comforts, unneutered, and had contracted two serious medical conditions.

Bow is now well known and will be well cared for from now on so the terrible incident that caused his injury and threatened his life has given him the opportinity to live the best possible life going forward.

We will briefly note that many TNR programs immunize cats while sterilizing them, and this practice can help save strays and feral community cats from contracting and spreading some of the serious conditions they currently so often fall prey to. Organized feeding of feral colonies can, of course, improve their health and their lives, as well.

This slideshow video “A Song for Bow”, dedicated to Pat, David and Ernie of the family who found and rescued him after the assault, tells Bow’s story from the time he was found shot by the arrow through the recovery process. It is also the story of his supporters and their efforts to get justice for Bow.