A motorcyclist on a cross-country trip rescued a burned kitten and the pair rode together on the journey home.

When motorcyclist and vintage Volkswagon enthusiast Pat Doody showed up at the Lowbrow Getdown motorcycle gathering at Nelson Ledges Quarry Park in Ohio this summer his little co-rider became the center of attention. Pat and his little friend Party Cat’s story came to light earlier this month in a feature at Revzilla that came out of a meeting at the July Ohio event.

“I was coming back from Born Free in California, and we had made it to Nevada,” Pat told us. “I was at this truck stop getting gas, and this little guy just needed help. He was pretty badly burned, so I picked him up and tucked him inside my vest. We’re feeding him regularly now, so he’s doing better, even though he’s sort of living on the road until we get home.

“He’s been eating tuna fish out of those dry-foil packs you can buy, and his burns are pretty much all healed up except for the little spot on his lip. He’s so chill. He just hangs out in my vest when we get on the road. I’ve never met a cat so calm.”

Pat and Party Cat finished their journey when they arrived back at Pat’s home in New Jersey. Metro reports that Party Cat has a forever home with Pat and has been given a clean bill of health by the vet.

As the photos here show, Party Cat’s burns were, fortunately, not widespread or severe.  We can see the burned spots on his lip and nose, though. 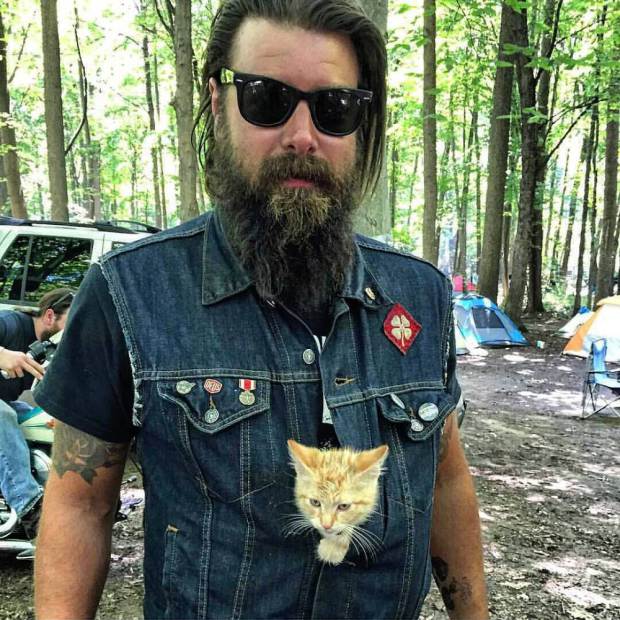