Ben went from being an injured stray Tom to a pampered friend and now he provides companionship to residents at a rest home.

Ben came to South Taranaki SPCA as a stray cat that had been under someone’s house for two weeks. His coat was dirty, he had a large cat bite abscess on his leg, was underweight and had not been neutered. Ben had obviously been living the rough life of a Tom cat.

After treatment for his abscess, Ben was neutered and given the best diet possible. He soon became a confident, cuddly cat at the SPCA, responding well to a healthy diet. As no owner came forward to claim Ben, he was put up for adoption.

About this time a local rest home and hospital, Trinity, contacted the SPCA seeking a male cat that was easy care and well-adjusted to be social in a hospital setting. Based on their time with him, shelter staff felt this was right up Ben’s alley, and he was given to Trinity’s hospital wing.

A couple of months later Shannon received a photo and note from the staff at Trinity. There was Ben sleeping on the lap of a patient named Mavis who was 101 years old. This warmed Shannon’s heart to see the impact SPCA can have on both animal and human quality of life. She has since framed this picture and hung it in her office to remind her on the bad days of the good that comes from working at the SPCA. 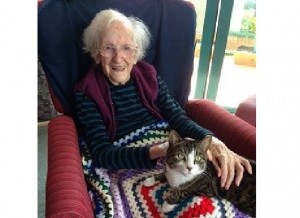