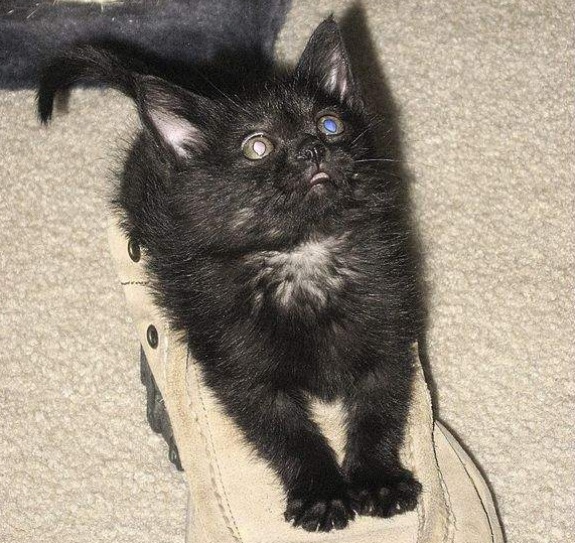 Little Yoda began life as a stray, then survived a series of threats to his safety last month, when an earthquake shook greater Washington DC just before Hurricane Irene tore through leaving flooding in its wake. A Maryland couple rescued him from the aftermath of nature’s destructive forces and is caring for him until he can be adopted.

Odenton MD resident and animal lover Barbara Giddo is intimately acquainted with the effects of disaster on cats and dogs; she spent a week volunteering on the ground volunteering at the Joplin MO Humane Society immediately after that city was largely destroyed by a terrible tornado in May.

Barbara’s husband Wayne Smith works in Upper Marlboro MD and feared for the safety of three feral cat colonies known to be living in the fields behind his office there. He estimates that there were about 19  cats a a few kittens. After Irene and the subsequent flooding, Wayne walked the fields to check on the cats and to give a respectful burial to those who did not survive. Wayne found 5 who succumbed to the flood waters and he collected them for a proper burial. Then he found the tiny kitten now called Yoda.

Yoda was wedged safely in a pile of garage doors, it’s not known whether he happened to be there when flood waters hit, or if an adult cat  placed him there. He was cold and covered in a oily coating when found, so Wayne was surprised when he moved, showing signs of life. Wayne tucked the weeks old kitten into his shirt for warmth, then wrapped him in towels and purchased kitten milk in order to feed him.

Yoda wouldn’t eat at first and was discovered to have a fever. He was taken to a vet and received meds to treat the fever and he came around and began to eat, doubling his weight from one to two pounds in a week.

“He’s a great cat; he learned how to use the litter box the first day after we found him. I just had to scratch my hand in the litter box, and he figured it out”, Wayne told local paper The Gazette.

The couple will care for little Yoda until he is ready for adoption and a good home is found.