Three days after a huge and tenacious wildfire tore across portions of southeastern Texas, burning hundreds of Bastrop’s homes to the ground, many animals have been brought to safety while others are missing. Cats and dogs were evacuated from the Bastrop Animal Control shelter on Sunday night and taken to Austin. By late in the day on Tuesday the shelter reopened when the wind shifted and drew the fires away from the building. The shelter is  filling up with pets who are separated from and missing their families, as lost and found listings begin to try to reunite them. Animal Control is also providing temporary care and housing to pets whose families are themselves displaced and scrambling for shelter. 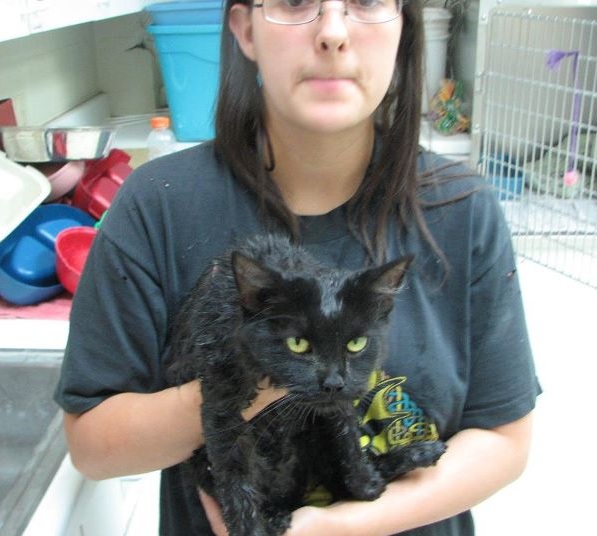 Karina Oakes posted the above picture in an online album of displaced pets, saying ” This sweet little cat was found in a burning tree. The firefighter had to knock her out of the tree to save her. She is super sweet and is missing half her tail (not because of the fire)”.

Karina continues, “All of these animals have either been dropped off by owners to be picked up later when they have somewhere to go or were found and are trying to be reunited with their families, please share this album! Lets find their families!!!”

Below are a few photos with the little faces of animals affected by this disastrous fire. They include those safe at the shelter, as well as those who are missing. We have selected only photos of cats for this story, but there are many dogs in in the same circumstances. “This fella was so scared, hope we find his family” “Nervous, but relieved to be out of harm’s way” “This poor kitty has injuries around her neck, but is getting treatment. Very nervous but very sweet” Austin Pets alive!, which took dogs during Sunday night’s evacuation is assisting in Bastrop with medical supplies and animal search efforts. People who are missing their pets can email APA with the relevant information, including whether the pet was presumed to be inside or outside, and granting searchers permission to enter their homes.

Evacuations of area homes and farms continue and the displaced also include many horses, as well as a number of llamas and alpaca.

The facilities caring for the displaced pets, including Bastrop Animal Control, Austin Humane Society, and Austin Pets Alive! can all use donations of food, litter, crates and other supplies to help deal with this crisis. They can also make use of gift cards to PetSmart, Petco, and Sam’s Club.