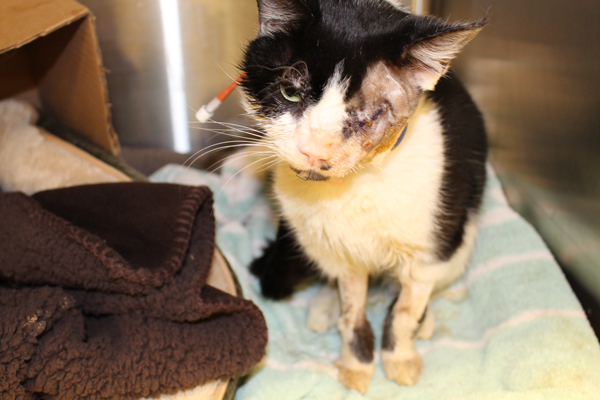 Amid all the sensationalist headlines about Bart, who was buried alive and dug himself from his grave to return home, seriously injured, dehydrated and in terrible shape, after 5 days, the intrepid little cat at the center of the story continues to heal.

Bart had, as far as is known, been hit by a car before being buried in a shallow grave, digging his way to freedom and showing up in a neighbor’s yard. He had a badly damaged eye that needed to be removed and a broken jaw that had to be wired so it could heal, along with other less serious injuries. Bart’s owner took him to the Humane Society of Tampa Bay’s animal hospital, where he had surgeries to deal with his injuries. After his jaw was wired, Bart was given a feeding tube to help keep him properly nourished while his jaw heals.

The Humane Society of Tampa Bay, who continue to care for Bart, have posted a couple of positive updates on his condition this week, with the most recent one as follows:

UPDATE! February 4, 2015- We are so pleased that Bart continues to improve, day by day. Today when we approached his cage, he actually got up and walked to the door to greet us with chirps and meows. He is also showing a good appetite and interest in eating. He still needs the feeding tube and his jaw will remained wired for another 6 weeks, but he is definitely on the mend. We are proud of the little guy!

As is well known by this time, the story has been widely publicised worldwide, with Bart being variously called a Miracle Cat or a Zombie Cat. The humane society, which initially stood behind Bart’s owner, reversed their decision to give the cat back after his recovery, and are now keeping Bart until he is ready for adoption, which will not occur until he is fully healed.

It came to light that it was known by at least one person close to the story that Bart was still alive when he was buried, though his petdad says he thought the cat was dead.

Adding to the drama, the humane society says they received a call last weekend from a person who threatened to storm the shelter and steal the cat.

Bart is, of course, unaware of the wild developments in his story and is just doing his best to live every day and to heal.

For more, see our earlier posts:

Miracle Cat, Back From The Grave!

Cat who returned from the grave recovers from successful surgery

Miracle “Zombie” Cat Bart will not be returned to his owner, Humane Society says