This is really good news about a terrible problem. It involves real life heroes and villains, plus a dose of politics and the truth about a dirty, cruel business that needs to end. Buried in a massive spending bill is a provision that will shut down shady dealers who buy and sell dogs and cats for research — all paid for by your tax dollars. That could change if Congress does the right thing and cuts off funding to pay for licensing of so-called Class B animal dealers by the USDA. 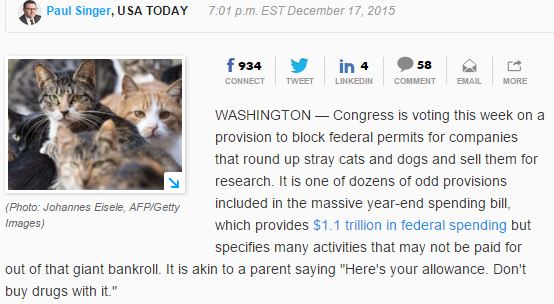 Every year, these licensed dealers work with illegal “bunchers” to round up thousands of dogs and cats who will end up in laboratories. These animals include illegally trapped strays, both cats and dogs. Some are stolen outright from their yards. Others are purchased from shelters and flea markets for $20 or less and sold to laboratories for hundreds of dollars. Animal advocates have monitored this industry for years, and say that dealers frequently deceive pet owners by responding to ads giving away “free pets to good homes” so they can sell them to laboratories for research. The USDA says Class B dealers supply just 3,200 dogs each year, but other sources, including one documentary film, “Dealing Dogs,” places that number at closer to 40,000 each year.

The HBO documentary Dealing Dogs exposed the ugly world of Class B dealers and the “bunchers” who work for them rounding up dogs to sell for research. Researchers favor beagles because they are gentle and easy to handle.

Worst of all, these same Class B dealers are licensed by the US Department of Agriculture. That could all end soon if Congress votes to end funding for the USDA to pay for licensing. Animal advocates have fought long and hard for this measure, which is being hailed as “a great victory for animal welfare.” Congresswoman Lucille Roybal-Allard of California deserves credit for including language in an amendment to next year’s Agriculture Bill that would cut off funds that make it legal for Class B dealers to sell “random source” cats and dogs for research.

“Almost five decades after Congress banned the sale of family pets into research, thousands of illegally obtained cats and dogs are still marketed each year to research facilities by Class B dealers,” said Roybal-Allard. These dogs and cats often “suffer greatly” in the hands of dealers, the press release states. They are transported in filthy cages, left out in the cold and heat, and deprived of food and water, the press release states. Only a small number of these dealers are still in business. However, time and money spent licensing them is an “unjustifiable drain on USDA resources,” says Roybal-Allard.

Animal advocates are hailing this important move, which awaits approval by Congress. “We are very grateful to Rep. Roybal-Allard for taking this issue,” said Nancy Blaney, senior policy adviser for government and legal affairs at the Animal Welfare Institute. Blaney called the Class B dealer industry “cruel, costly, scientifically unnecessary and corrupt.” Worst of all, “it puts Americans’ dogs and cats at risk of being stolen for sale into research.”
The Humane Society of the United States and its President Wayne Pacelle have fought hard for this measure. In his blog, Pacelle explains whey the current system is broken. “Unlike reputable Class A Dealers, who are specifically licensed to breed and sell animals needed for research, Class B dealers are licensed to adopt and buy animals from random sources, including animal shelters and pet owners.” Driven by a desire for profit, these dealers “often resort to fraud, deception, and outright theft.” They mislead pet owners and traffic in stolen pets and trapped strays. “They haul animals across state lines, making it nearly impossible for their families to find them.,” writes Pacelle. Many keep falsified records to conceal their methods. Last year, the National Institutes of Health announced it would no longer do business with Class B dealers. This ugly business was exposed in a six-month investigation by Last Chance for Animals, as reported by Newsweek and also in the HBO documentary, “Dealing Dogs.”  Newsweek reported that dogs “were crammed into narrow feces-covered cages, some malnourished or bleeding from open wounds. Some were already dead, their bodies lying stiff and unnoticed in the back of the cage. One dog, considered a ‘biter,’ was shot in the head.”

Despite prodding by Congress, the USDA has not taken action and the abuse continues. Pacelle and others are hopeful that the amendment will be approved and are asking animal lovers to contact their Congressional representatives to express their support. Sen. Barbara Mikulski of Maryland and Rep. Nita Lowey of New York were also instrumental in the fight to protect pets. “More work remains, but this is a major moment for our cause,” said Pacelle. Every year, 90,00o dogs and cats are sold to research facilities, according to the USDA. Of those, 3,200 come from Class B dealers, while the rest come from licensed Class A dealers.