The kitten born without hind legs had surgery for a prolapsed rectum this week, followed by complications. Carrie Hawks was thrilled and relieved to see him racing around like a spaz (her term) again today because it showed he is feeling better. A new video shares the fun. 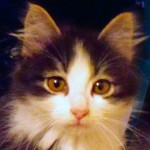 Carrie Hawks first saw the two legged kitten when he began coming to a colony feeding station at her Dad’s work in May. It took about two weeks to capture him, and Carrie brought him home on May 31.

A trip to the vet confirmed that Anakin had been born without his pelvis and hind legs but was otherwise mostly normal.

Anakin, Kitten born Without Hind Legs is Rescued and Gets a Home tells more of Anakin’s story and includes the charming and inspirational video that has touched thousands of hearts.

Earlier this week, Anakin developed a prolapsed anus that developed into a prolapsed rectum. Th kitten has been going to the vet every few days since he joined Carrie’s household, so this development was closely monitored. Anakin had surgery for the condition on Tuesday, then suffered complications with straining and another prolapse. 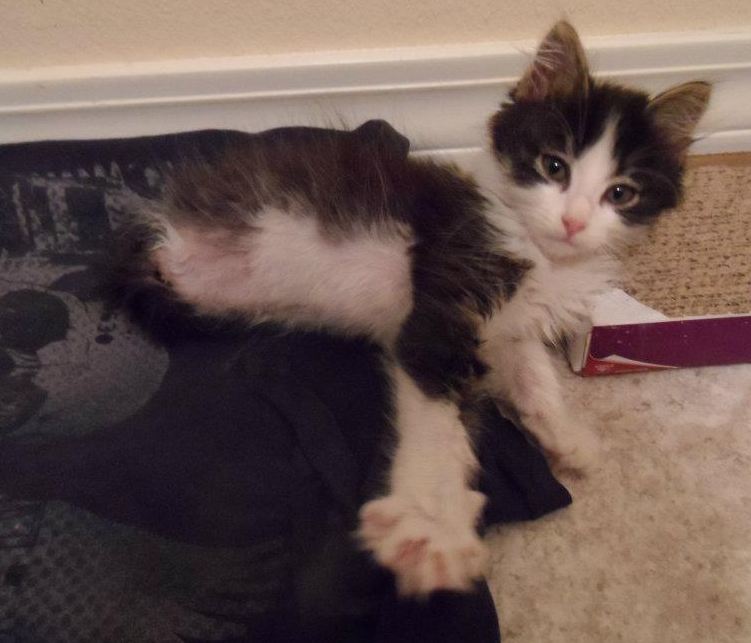 The second prolapse was treated with a numbing cream which is thought to have caused twitching that appeared to be muscle spasms. Sub-cutaneous fluids were administered to flush out his system, then he was allowed to rest. Carrie says he still showed minor twitching but purred.

On Thursday,  Anakin was put under anesthesia and given an enema plus a barium enema with x-rays to check for abnormalities in his intestines. The vet said Anakin’s intestines looked normal. He was found to have  Coccidia, which may have contributed to the prolapse, and he is being treated for that.

All in all, Anakin has had a trying week, so Carrie was understandably thrilled and relieved to see him back in business being energetic and playful today. The new video, shown below, has more meaning when we know of the week that preceeded it.

You can follow Anakin and his progress at the Anakin the Two Legged Miracle Cat Facebook page.

Here he is, in Carrie’s words, being a little spaz, and feeling much better.