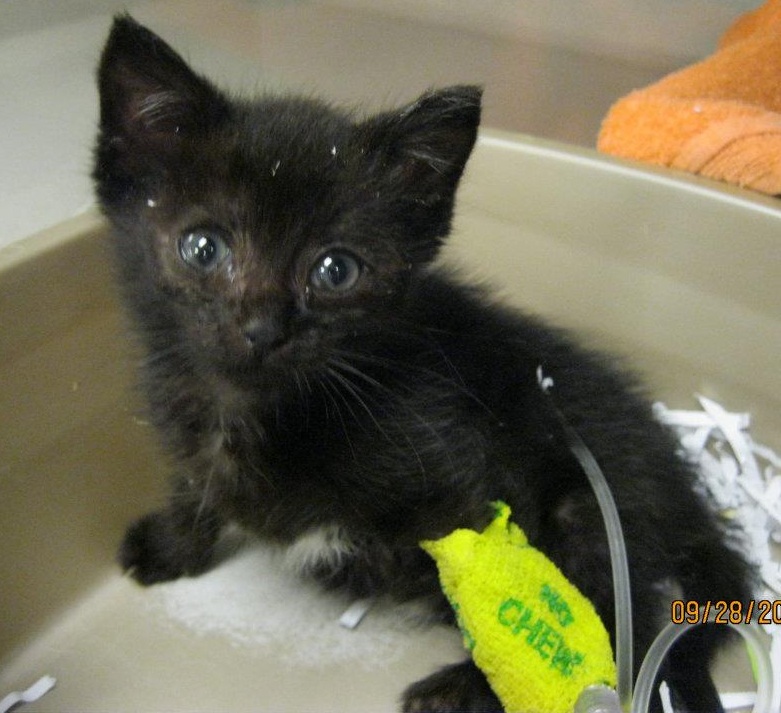 Friday night 9/30, still in at the clinic

Amazing news! An injured kitten whose progress we’ve followed this week has made the huge leap from veterinary clinic oxygen chamber to foster home.

Tabitha kitten was found last Monday, crushed and suffering in a plastic bag in a dumpster in Albany NY.  A maintenance man heard her cries and rescued her, then turned her over to local rescue group Orange Street Cats. Tabitha spent the week receiving care at Capital District Animal Emergency Clinic, seeing specialists from Upstate Veterinary Specialties. She has four fractured ribs and a damaged lung.

The tiny 4-6 week old kitten, weighing less than a pound, went through ups and downs as she fought to recover in an oxygen chamber, but has demonstrated great improvement and gone to her foster home today.

Tabitha is out of the hospital and living that foster home as of  this afternoon. She will need to see the vet frequently and her ultimate status is not yet known, but her will to live, coupled with great and attentive care, has helped her to become strong and stable enough to take this giant step.

Two days ago she was still in precarious condition after an afternoon downturn but the bounce that brought her back up the following day has continued.

Last night Tabitha made it all night on room air, without having to have the oxygen chamber activated, and was switched from IV antibiotic to oral. Those two milestones helped clinic staff  make the decision to release her to foster care.

For details on the story behind this update, see Tabitha Kitten Rescued from Dumpster, Fights to Recover in Oxygen Chamber and Tabitha’s Story: Two Video Reports on the Injured Kitten Fighting for her Life.

Diane Metz of Orange Street Cats rescue has put much of Tabitha’s care on her own personal credit cards. OCS is accepting donations, and anyone who wishes to donate to help with Tabitha’s medical care, which will continue, can click  the link for the group’s website: Orange Street Cats . There is a donation button for those who like the convenience of donating with a few clicks, and instructions for those who wish to donate otherwise.

2 thoughts on “Amazing! Tabitha Kitten Out of Oxygen Chamber and Into Foster Home”