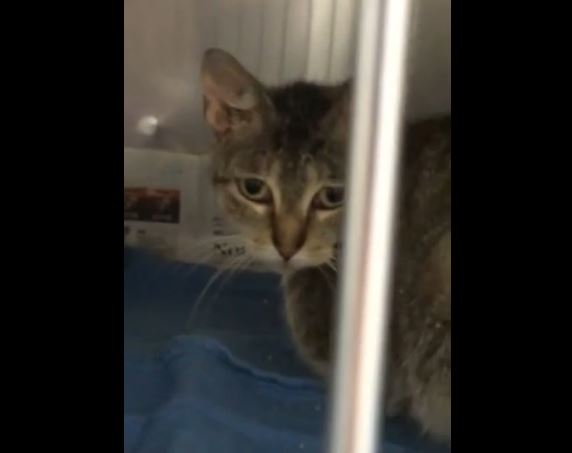 The caring animal rescuers and advocates at Undercats4Life, of South Florida, are bringing the plight of a group of seized cats to light.

Undercats4Life visited the cats – more than 30 of them – at Palm Beach Animal Control and made the video below.

The cats are in temporary custody after being removed from their home when their owner was arrested on child pornography charges recently.  Doug Westcott does not want to relinquish ownership of the cats, and a judge will decide within 30 days whether he can keep them. Capt. David Walesky of Palm Beach County Animal Care and Control says animal officers will ask that the animals be permanently removed from Westcott’s care. Not only were the living cats not given adequate care, officers discovered numerous dead cats stored in freezers, which is not uncommon in hoarding cases. While a much lower figure was givien in early reports, it seems that a total of 97 dead, frozen cats were found.

The future for the living cats remains very uncertain, as they are being held at a high-kill public facility. Those advocating for them say they have been through hell and deserve some happiness and a chance at new lives.

We learn more about the cats through conversation between animal control staff and the visitor from the rescue group on the video, as she visits some of the cats in their cages at the shelter. The cats, who are not spayed or neutered, and have fleas and minor conditions, are mostly in better shape than expected, and are all described as friendly.

As of this writing, the cats have been caged at animal control for two weeks. According to Undercats4Life, who are well acquainted with this case: “These cats endured HELL and now they have been in a cage for 2 weeks pending the outcome of the case or until he surrenders them to the county which could happen any time which means an immediate death.

“Urging and begging everyone for your help. There are 2 mom and kittens along with many others. One of the moms tested positive for FeLV.

“They deserve a life without abuse and it is not their fault they are in this position. Lets all work hard to find them rescues and homes!!”

See details on the story below the video.

An investigation into child pornography led to a suburban Lake Worth man’s arrest Wednesday morning as well as the gruesome discovery of dozens of dead cats stored in freezers in the man’s home, authorities said.

Westcott was taken into custody as detectives served a search warrant and seized a computer from his home in the 5900 block of Ithaca Circle. He faces three counts of child pornography.

As workers removing the cats wore masks to combat the house’s stench, neighbors in the single-family home community, located north of Lantana Road and east of Jog Road, described a pattern of bizarre behavior by Westcott and said it was common to see cats running around the front and back yards of his home.

“This is not the kind of the neighbor where you’d say ‘Oh, really?’ ” said a neighbor who did not want to give her name. “I’m not surprised … He would never wear shirts, he used to always have this busy look and then he loves kids. He would come to your house and try to give the kids little things. “

The woman’s 12-year-old son, who only gave his name as Anthony, said he would occasionally visit the home as a woman who used to lived there took neighborhood kids to Florida Atlantic University sporting events. The boy said he saw several cats sleeping on the beds, with some of the animals wearing diapers.

“All I saw was just cats in little diapers. He provided milk for them,” Anthony said. “It was kind of like a nursery.”

Neighbor Gaby Dorleus said the yard was often a mess as Westcott would leave out food on paper plates to feed the cats.

In one instance, Dorleus said, he helped Wescott move a freezer into the home.

“One day I helped him with a freezer from his car to his house. Animals everywhere,” he said. “He had a lot of animals in his house. I don’t know how many, honestly.”

William Penn, another neighbor, said the stench from the house was bad.

“I never knew he had dead animals in the house, but outside (there were) cats everywhere,” the 16-year-old said. “Every time you passed his house, you smelled cats.”

Westcott was booked into the Palm Beach County Jail on Wednesday and is expected to make his first appearance before a judge this morning.

Records show that he previously worked as a manager at Pizza Hut and, in 1994 and 2000, made unsuccessful bids for a seat in the Florida House of Representatives.

Westcott refused to give up custody of the surviving cats, Walesky said. A judge will decide within 30 days whether Westcott can own the cats again, but Walesky said Animal Control officers will argue that he should not.

This was not the most horrific case of animal hoarding Walesky had seen, but the fact that Westcott had four separate freezers full of dead cats was unusual, he said. In most animal hoarding cases, the animals’ bodies are stored in a closet or back room, he said.

Animal Control may conduct necropsies on some of the cats, but Walesky said the department doesn’t have the resources to do so for all of them.