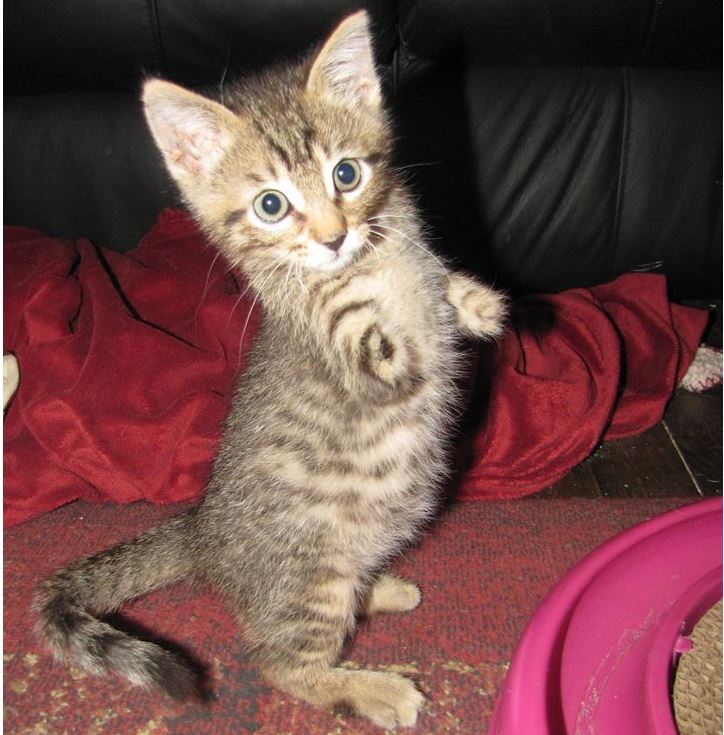 “It is a little funny,” says Scott, “Because we have people from all over the world telling us what a great cat he is, and, to us, he’s just Mercury.”

Mercury lost his front legs and the tips of the toes on his back legs when, at only 4 days old in September of 2013 he was accidentally injured by a string trimmer being used to clear tall grass. He was taken in by The Community Cat Coalition of Edmond, an all volunteer group operating in Edmond, Oklahoma.

Mercury’s caregivers fed him around the clock and cleaned his wounds multiple times a day. As he grew, they helped him with his mobility, and he met each of his challenges.

The first video of Mercury showed him moving himself to get to a dropper of milk. Later videos show him learning to stand, to walk, to climb stairs and to play, and also looking for affection and cuddles.

Scott explains why Mercury has affected so many viewers, saying: “I thing it’s just the fact that he never gives up. If he wants something or he sees a goal that he wants he finds a way to do it.”

As Mercury’s videos went viral, he went from having 5 or 6 thousand fans over 50,000 in less than a week, Scott says.

Scott says it has been fun raising Mercury and, while he provides inspiration for thousands, at home he is just another member of the family.

You can follow Mercury at the Raising Mercury Facebook page and at Twitter
.
Watch the July 25, 2014 story from Channel 4, then see a selection of his viral videos below:

2 thoughts on “A Visit with Mercury, the Inspirational Two-Legged Cat”