Here's a CBC video report on George, the cat lost by Air Canada at Edmonton airport in three months ago, then finally found when he came to someone's door looking for food in recent days. We get to see George in action with Hope Gulseth, the woman who found him, along with commentary from petmom Vanessa Summerfield. As Hope's husband searched online for George's family he was … END_OF_DOCUMENT_TOKEN_TO_BE_REPLACED 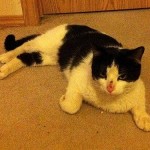 ... and, hopefully, this time the news will prove to be true. Reports today say that George the cat is found, and he saved himself. The George Is Lost at Edmonton Airport Facebook page, run by advocates, supporters and searchers, reported today that the cat who went missing at Edmonton airport from an Air Canada flight three months ago is alive and well and currently staying … END_OF_DOCUMENT_TOKEN_TO_BE_REPLACED 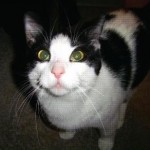 Rumors that the cat found frozen to death at Edmonton International Airport in November was not the missing George, who was lost from the cargo hold of an Air Canada flight on a stopover on September 23, and has been the object of a search, have now proven to be true. Reports confirming this started circulating on Thursday, and have been further confirmed by a CBC story posted … END_OF_DOCUMENT_TOKEN_TO_BE_REPLACED George, lost by Air Canada at Edmonton Airport on September 23 has been found dead, nearly two months from the time he ended up out of his crate and on the loose during a stopover. His body was found this past Monday, November 21, following a cold spell last week. We reported on George in Another Cat Lost at an Airport: George Goes Missing From Air Canada Flight, on October … END_OF_DOCUMENT_TOKEN_TO_BE_REPLACED A cat who escaped his carrier before boarding an Air Canada flight in Winnipeg last Saturday was spotted early Thursday and was captured with the help of missing cat specialist Claudia Allen. News outlets in Winnipeg reported the story after Pat Torlen's cat Lightning went missing and again after he was safely recovered less than a week later, but didn't feature … END_OF_DOCUMENT_TOKEN_TO_BE_REPLACED