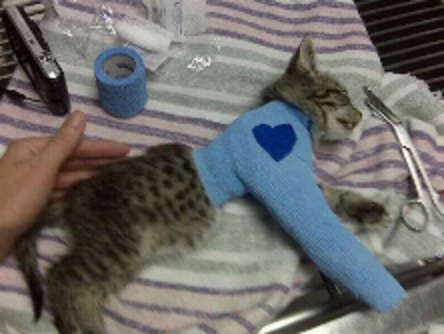 A kitten is on the mend after an attack that left a 9 year old boy a hero and a 12 year old charged with a crime.

On Saturday, May 28, a 12 year old Suffolk, Virginia boy was charged in a vicious attack on a 7 week old kitten. Readers who want to know the details of the attack can watch the news video below. Suffice to say, the tiny cat was beaten. According to news reports a 9 year old watched helplessly until the older boy took out a knife and threatened to cut the cat, at which point the younger boy says he was compelled to act and managed to knock the knife from the attacker’s hand. 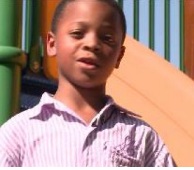 The young hero in a still from his tv interview

According to the local reports, 9 year old Jamarea Mills and his brother were playing outdoors with the kitten on Saturday morning when the older boy came along, picked it up and commenced his attack.

“I was sad; we tried to tell him to stop but he just kept doing it.” Jamarea later said as he related the terrible incident to a television reporter.

After the brutal attack the children who’d been playing with the kitten picked it up and put in a box, thinking it was dead yet wanting to protect it from the elements. The kitten was found in a grassy area and was initially unresponsive when an Animal Control officer picked it up, at which point it opened its eyes and meowed.

The kitten suffered injuries, with a broken leg and internal bruising, but has been treated by a veterinarian and is recovering. Though only weeks old, the kitten is described as a stray and will be made available for adoption from the local animal shelter this Friday.

The 12 year old boy accused in the attack  is charged with one count of misdemeanor cruelty.

When asked by the reporter how he felt upon learning that the kitten had survived and would recover, Jamarea simply said “happy”.

WTKR news video with the young hero’s telling of the story.

Note: The kitten, who came to be called Little Heart, for the heart on his bandage, succumbed to his injuries the following Friday, the day he was going to be made available for adoption. The killer was charged, found guilty and sentenced.