Forgotten Felines of Hunstville, AL is working to rescue and rehome 40 cats found at an abandoned drug house. The kitties are headed for better lives. 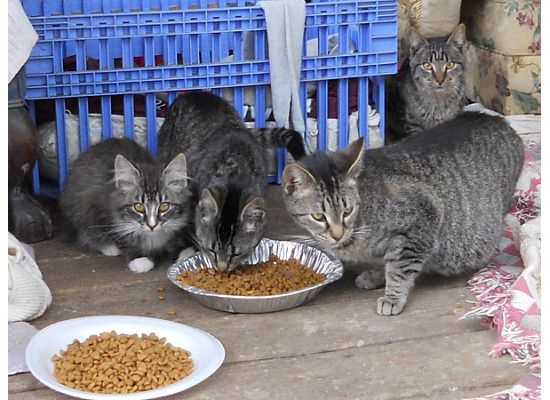 A few weeks ago the rescue group received an email from one of their volunteers telling of a situation in Limestone County, Alabama. Property owners were aware that their former tenants from a rental house had animals, but were shocked to find a large number of cats on the property after the tenants were evicted. The owners were further shocked to see that the house was left in a state of filth and disarray. The house is being described a a drug house, but we do not have details on what went on there. 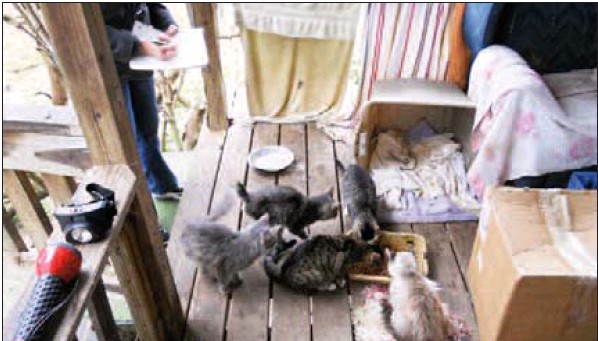 Fortunately, the property owners began feeding the cats when they discovered them, and were open to having them rescued rather than merely removed. The volunteer described the cats as pretty, friendly and people-oriented and said that though many were frightened and wary, some would try to leave with the people who came to see them. When Forgotten Felines stepped in to help, the cats were malnourished and starved for attention, as well as unsterilized and  suffering from upper respiratory infections. A Mama and her babies were among the first to be rescued, since the kittens were vulnerable and had URI. One kitten died but the others responded to treatment and are thriving. Another cat was euthanized due to multiple health problems. Despite those losses, the Limestone Cats, as they are called, are generally improving and doing well in their rehabilitation.

As of this Tuesday, February 21, volunteer Linda Hickham wrote that 32 of cats had been rescued, with at least 5 more remaining on the property. The cats are currently being rehabilitated for their malnutrition and URI in preparation for their spay/neuter surgeries. After they are sterilized they will be placed into a foster and adoption program. Some cats, however,  are expected to need further medical care.

The local and greater communities have been generous in donating to a ChipIn on behalf of the Limestone Cats as the caretaking and medical expenses mount. Hopefully, the community will continue in their commitment and the cats will all find good forever homes when they are ready. Local residents Linda and Homer Hickham have been instrumental in effecting this rescue and are fostering some of the cats.Some of the photos here are theirs. From the ChipIn: “Her name is Mercy; she is one of the momma cats we pulled; she is leukemia positive and we are going to do a bone marrow test to verify.We would love to find her a home without other cats, or with cats that are already Leukemia positive.”

Anyone wishing to donate to help with the Limestone County Cats can do so via the ChipIn here:
ABANDONED LIMESTONE COUNTY CATS CHIPIN
Checks can be sent to:
Forgotten Felines, Inc.
Attn: Limestone/Madison County Cats
PO Box 60
Capshaw, AL 35742
The group is also accepting PetSmart, Petco, Walmart, Target, etc. gift cards.
All donations are tax deductible and you will receive notification of your donation.
The group can be reached by email at [email protected]
They maintain an online presence at Forgotten Felines on Petfinder.
.