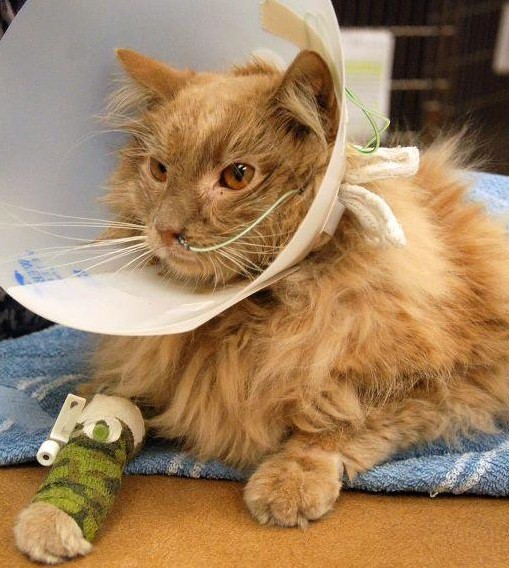 Now that Karen Pascoe is headed back home, Jack The Cat is Lost in AA Baggage Facebook page reports tonight that she spent the weekend visiting with her beloved ca, Jack. The visit was kept hush hush to avoid a media circus at the veterinary hospital, showing that Karen’s first priority is her boy and his health.

Jack has some very serious health issues as a result of his two months spent largely without food while lost at the American Airlines section of JFK airport. Jack was discovered when he fell through ceiling tiles in the AA customs room five days ago. We are not sure how long he may have been in between floors and whether he was trapped there. What we do know is that Jack was malnourished to the point where he was in serious danger from complications.

There have been reports in recent days giving his condition as anywhere between serious, critical, and on death’s door. The Facebook page run by his family acknowledged very serious concerns but has been optimistic about a recovery.

Last week, veterinary internist Nicole Pacifico spoke to the press, saying “Jack is still critical at this time. He has shown some improvement, but the biggest issue is some life-threatening skin wounds that are present. He is severely muscle-wasted and has evidence of fatty liver syndrome, which lets us know his malnourishment was pretty chronic.”

Our last post on Jack, on Thursday, 10/27,  reported that he had undergone surgery for a leg wound and come out of that in good shape. By Friday he was reported to be stable and doing a bit better than the day before. A blood transfusion brought his red blood cell count up. The good news from Saturday is that Jack stood up on his own for a short time; another encouraging sign.

The Facebook page ecstatically posted tonight, “GOOD NEWS!! Everything the vet is measuring on Jack is trending in the direction of him getting healthier!!! AND… our boy ate some food on his own!!!!”

Onward and upward … we hope, to a great recovery for Jack.