HALO Animal Rescue had their donation box snatched in a bold daylight grab; then their pickup truck was stolen and their chain link fence destroyed.  HALO says the criminals have not just committed theft and destruction; the effects of their actions make them animal abusers. 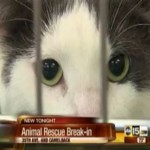 HALO Animal Rescue operates a no-kill shelter in Phoenix, Arizona, providing an important service to the area’s companion animals and the people who care for and about them. They work with local intake facilities to save cats and dogs from euthanasia and provide a resource for people seeking animal companions. The non-profit has recently been hit with series of hurtful acts, both attempted and successful.

In a daylight grab and run, two young men entered the shelter and took the donation box in front of people, who were both too stunned and presumably too scared to stop them. The shelter’s video camera captured the act.

Thieves failed to steal a car one night, but succeeded over the weekend in stealing HALO’s pickup truck that was used to pick up animals. The thief or thieves then drove the stolen truck through the rescue’s chain link fence, doing great damage there, as well. The white truck is a 1997 Ford F150 that had two bumper stickers. One said HALO ANIMAL RESCUE and the other said (Peace Symbol) (Heart) & Sterilization.

HALO says these acts have hurt their ability to save, care for and rehome animals, and calls the criminals behind the acts animal abusers. Volunteer coordinator Guillermo Lopez told ABC 15 news “In my head I don’t even think of them as car thieves. They’re just animal abusers. They’re doing harm to cats and dogs that we’re trying to save, and the ones that are here.” Guillermo said he doesn’t know how the shelter can afford to replace the truck or repair the fence that formerly surrounded the dogs’ turnout and play area. Police say they are investigating but have no leads.

Anyone wishing to donate can call HALO at (602) 971-9222 to give over the phone, or can send donations to HALO Animal Rescue at 5231 N. 35thAvenue, Phoenix, AZ 85017. Donors can also give online via the donation page at their website. To give via the website, click on one of the photos at the donation page.

Below is a news report on the thefts and damage at HALO, followed further down the page by a documentary on HALO as a Rescue Visionaries featured rescue organization.

HALO Animal Rescue Visionaries Documentary, sponsored by PetSmart Charities and introduced by Sam Waterston. The informative 26 minute documentary about the work of HALO Animal Rescue’s work in Maricopa County, AZ educates on the homeless pet problem and how rescues partner with public facilities to save lives . HALO’s President & CEO walks you through a “day in the life” of HALO and its partnerships with other local rescue agencies. This behind the scenes look at animal welfare in the community will help you get a better understanding of how animal shelters work to save animals’ lives.