Slinky saved his petmom’s life by tapping on the neighbors’ window to raise the alarm as she slipped in and out of a semi-comatose state.

Janet Rawlinson, of Cormholme, Lancashire, UK had a bad reaction to the morphine she was prescribed for back pain she suffers due to a neurological problem and spent five days slipping in and out of consciousness.

Her usually aloof cat Slinky Malinki got the attention of her neighbors, Mel and Stephen Sharp, by prowling up and down the fence and tapping at their window.  Realizing they hadn’t seen Janet for a few days, the Sharps went to investigate, found Janet passed out, and called for medical help.

Janet credits her cat with saving her life.

“Slinky was on the fence outside, trying to get the neighbors’ attention,” Janet said.

“He was tormenting their dog as well to get their attention.”

“They realised they hadn’t seen me for a few days so tried the front door with the spare key, but my key was in the door.”

“They got in through the back and managed to wake me up. My neighbor said he thought I was dead.”

Janet says that Slinky continues to be vigilant in looking out for her.

“If [Slinky] doesn’t see me go in for a couple of hours he will come into the house and find me, and if I don’t see him he will tap me on the leg or arm until I respond.

“He never did that until the incident with the morphine.”

“I’ve just rescued two 12-week old kittens and he looks over them too.”

“He is like a gentlemanly uncle. That is how he treats everybody. He is both aloof and caring.”

Slinky is a finalist for Cats Protection UK’s 2014 National Cat Awards in the Hero Cat category. The awards will be made in August.

The National Cat Awards are designed to celebrate the extraordinary tales of survival, companionship and bravery in the feline world. 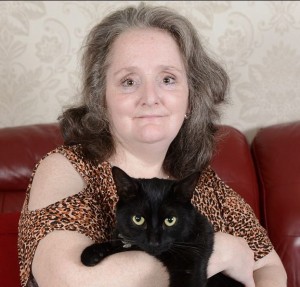