As prepared as they had tried to be for Hurricane Florence, the Carteret County Humane Society was in trouble.  The facility was taking on water. The roof was in danger of caving in. They were in need of immediate help to move the 123 cats and dogs and three staff members to a safe location.

The organization had put out a call for help early on, seeking donations of food and other items in preparation for the impending storm. Still, they did not anticipate that at following first signs of flooding and moving to the second floor, they would become trapped by the impeding roof collapse.

Groups took up the mantel to help, but while there were reports that around 8:30 p.m. on Friday evening animals and staff had been safely relocated, it seemed that was not entirely the case.  Shelter manager, Cassandra Tupaj, told the NewsObserver their team was still waiting on more crates as there were still 80 cats and 43 dogs that were waiting for rescue. That was at 10:45pm.

The good news was by Saturday noon, Tupay told the news agency that, “rescue groups (are) on the way to help. Animals are all OK!” Staff had remained with the animals overnight. “Staff are exhausted and still working hard,” she said.

The animal shelter reached out via Facebook, as well, during and following their evacuation to Fort Benjamin. 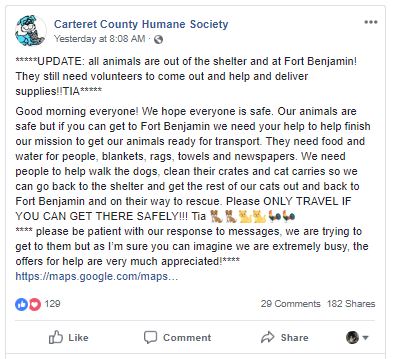 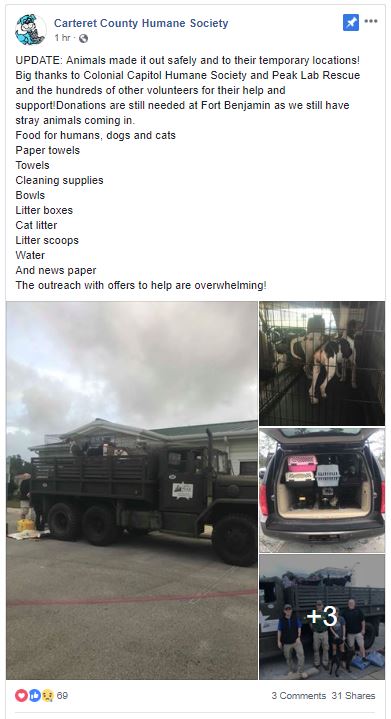 There is still much to be done for Carteret County Humane Society and other organizations throughout the region seeking help and assistance. Whether that is rehoming and fostering some of the animals, providing services, food, funding, even a pair of helping hands, take a moment to see where you can help. Every little bit will be appreciated.