Each new year brings the hope of reinvention and a chance for resolution but every now and again, it also brings a miracle.  On the brink of the New Year at Helen Woodward Animal Center, an ailing, tiny male kitten named Bliss was rushed into surgery and died on the operating table.  But, be it divine intervention or a mighty fighting spirit, Bliss was determined to see a new year and live out a long life with a forever family of his very own.

At just over one pound, Bliss was transferred to Helen Woodward Animal Center in mid-November from a local rescue organization with one litter-mate.  Only weeks old, the kittens had been found motherless and in need of around-the-clock care.  Center vet technicians went to work providing the kittens with medical attention, warmth, and nourishment, but as time passed and his brother began to gain strength and grow, Bliss remained small and weak.   An exam revealed that Bliss was suffering from a digestive problem and emergency surgery was required.  Unfortunately, Bliss’ young age, diminutive size and fragile system made the use of anesthesia dangerous and his chances of survival were slim.  With no other options, the medical team set to work trying to save his life.

“Once an orphan pet comes through our doors, they become part of our family,” stated Helen Woodward Animal Health Manager Amanda Kloss.  “We go to the same lengths we would go to for any of the fuzzy family members we have at home.  We knew it would be a difficult procedure for him, but survival would have been impossible without it so we did what was necessary.” 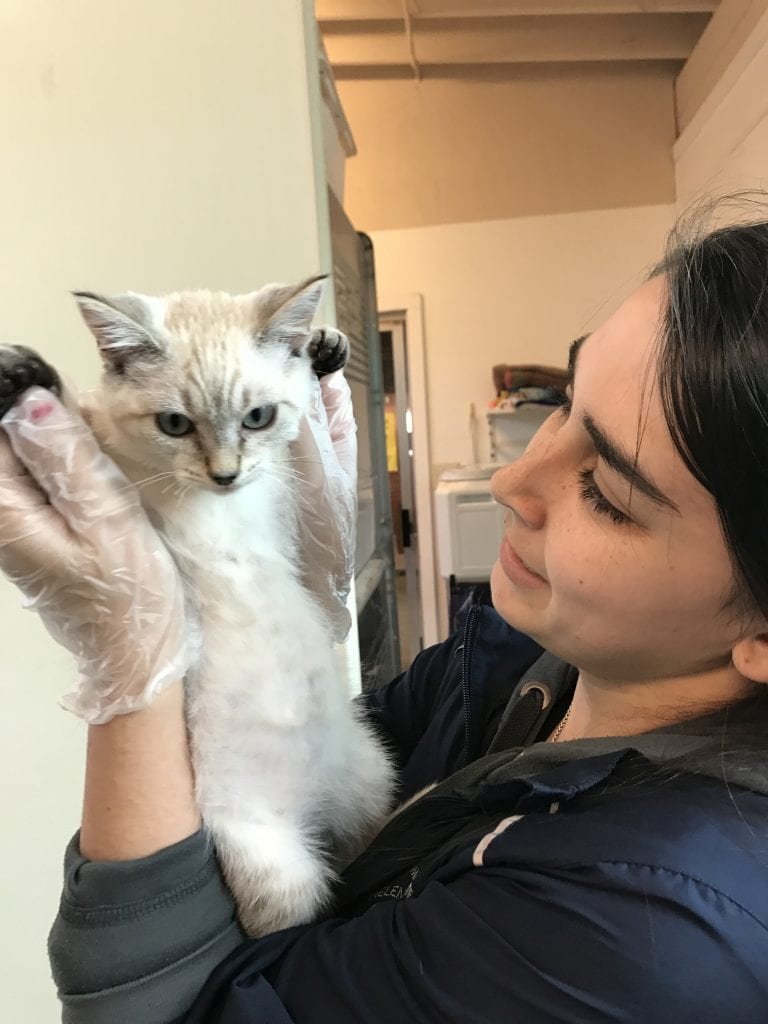 As suspected, Bliss struggled through the surgery.  His body temperature dropped and his little heart stopped beating.   But cats are known to have multiple lives and the Center veterinary team refused to give up on him.  They warmed him and worked to revive him.  As though Bliss knew he had a happy ending waiting for him in 2017, the little kitten fought through and came back to life.

“His name suits him,” explained Helen Woodward Animal Services Director Ed Farrelly.  “He’s a very happy kitten.  It’s as though he knows he got a second chance and you can tell he’s ready to take on the world.”

Bliss has recovered well.  He is nearly finished with a prescription medication and should go on to live a long healthy life.  He is available for adoption and ready to give a deserving family a lifetime of love.  For more information on Bliss, or to adopt him, please contact the Adoptions Department at: 858-756-4117 ext. 1, visit www.animalcenter.org or stop by at 6461 El Apajo Road in Rancho Santa Fe.

Helen Woodward Animal Center is a private, non-profit organization where “people help animals and animals help people.” Founded in 1972 in Rancho Santa Fe, Calif., the Center provides services for more than 57,000 people and thousands of animals annually through adoptions, educational and therapeutic programs both onsite and throughout the community. Helen Woodward Animal Center is also the creator of the International Home 4 the Holidays pet adoption drive, the International Remember Me Thursday® campaign and The Business of Saving Lives Workshops, teaching the business of saving lives to animal welfare leaders from around the world.  For more information, go to:  www.animalcenter.org.