Japan has an undeniable love affair with the cats.  From Catfes to cat-informed merchandise, to say the country is crazy about the animal is an understatement.  And this fascination extends to their transportation system, as well.

Tama was the first, ever, station master for the Japanese Railway system.  Her story mimics that of many celebrities, from a harsh, even cruel upbringing having been raised with a group of stray cats near the Kishi Station, discovered, and then elevated to the glitz and glamour of the railway industry.  Fed by local passengers, the feline was first befriended  and then adopted by the informal station master Toshiko Koyama.  This coincided with the time the rail line was having considerable financial troubles.  When the company formally destaffed all the stations to cut costs and select station masters from among those employed in the local area, Koyama was officially named station master, Tama in tow.  January 5, 2007, Tama, herself, was named to the post.  Her key duty was to greet passengers and remuneration for her good work was in the form of a station master cap and food.

Tama’s appointment increased passengers on the failing railway by 17% that month following an onslaught of publicity.   Company statistics indicated a 10% financial increase over the prior fiscal year that aligned with her taking on the role.  Studies demonstrated that her appearance at the station was directly responsible for contributing a significant amount to the economic coffers and in Janaury or 2008, she was promoted to “super station master,” in a high profile ceremony attended by both the company president and the city mayor.  Her promotion also made her the only female within the managerial structure of the business.

This elevated position also came with an office and private litter box, a converted ticket booth.  In recognition of her on-going contributions to growing the customer base she became the first cat and female to break the glass ceiling railway when promoted to corporate executive in the position of “Operating Officer.” In addition to her multiple roles, she also maintained a staff of two station master assistants, also both feline. 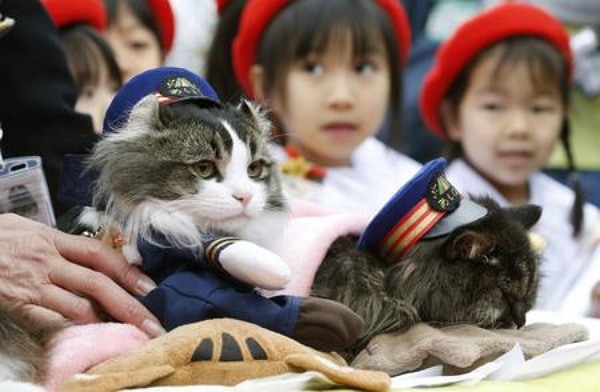 The response to Tama’s role by the general public continues to be fortuitous for the railway as they have appointed other such station masters to posts around the country.  Most recently, Bus retired from her position as the station master of the Ashinomaki-Onsen terminal having been with the company since 2008.  At 17 years old, she continues to live at the station in an honorary position, but newcomer Love has assumed the station mantel. Love’s first official duty was riding in a decorated Christmas train to the cheers of passengers.

Sadly, the original feline station master, Tama, passed away last year and following the traditional Japanese 50 day mourning period, was succeeded by Nitama, who had beat multiple rivals to receive the coveted position.  A spokesman for the Ryobi Group, who now own the railways, Hitofumo Ino, stated that Nitama was selected as she was known as a “beauty cat,” for her good looks, her ability to like wearing the station master’s cap (or more accurately not disliking the wearing of it), and having been a direct pupil of the beloved Tama.  All of this dovetailing off her own experience as a graduate of Cat Stationmaster Training School and tenure served as stationmaster at Idakiso Station in the rural Kinokawa.

Tama’s proud legacy seems to be destined to continue for many feline and passenger generations to come. With cats bringing so much good luck to the railways, it seems only natural that before long they dig their claws into other areas of the transportation industry. Only time, and a love of cats, will tell.