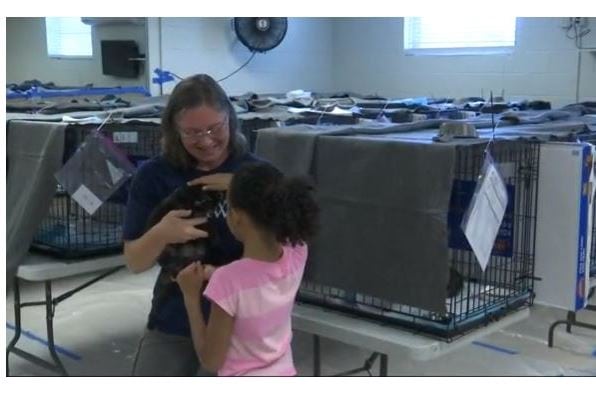 A little girl who was adopted by her family celebrated her 8th Gotcha Day by adopting a kitten from a rescue center for pets displaced by the recent severe flooding in South Carolina.

Kayla Hodge visited the Beck recreation Center in Georgetown County with her family on Saturday. The rec center is being used as a temporary shelter for animals displaced or lost due to the flooding, as well as some pets from the St. Frances Animal Center.

The family say they had not planned to go home with new pet but Kayla was drawn to an unclaimed kitten named Kermit. Saturday was Kayla’s 8th adoption Gotcha Day and ended up being Kermit’s Gotcha Day, too, as he got adopted into Kayla’s family.

Kayla told WBTW News 13 she was drawn to the kitten “because it was really cute.”

She explained Gotcha Day, saying: “It’s a day where like, ‘you got me.’”

The touching Gotcha day adoption was covered by WBTW as part of a greater story on the temporary shelter and the effort to help the county’s lost and stranded flood-affected pets.

“Residents were not able to get back and we had to go in,” said Shannon Walajtys, with the National Animal Rescue and Sheltering Coalition.

The organization has conducted water rescues in addition to sheltering and helping to reunite displaced pets with their families. They, along with local, state and nationaal agencies, have rescued about 100 pets.

“We were able to rescue several animals, both dogs and cats, and we brought them here to the temporary shelter,” said Walajtys.

“When the opportunity arises, when the animals have gone unclaimed, we can then place them up for adoption,” she said.

Watch the WBTW News 13 report on the story: