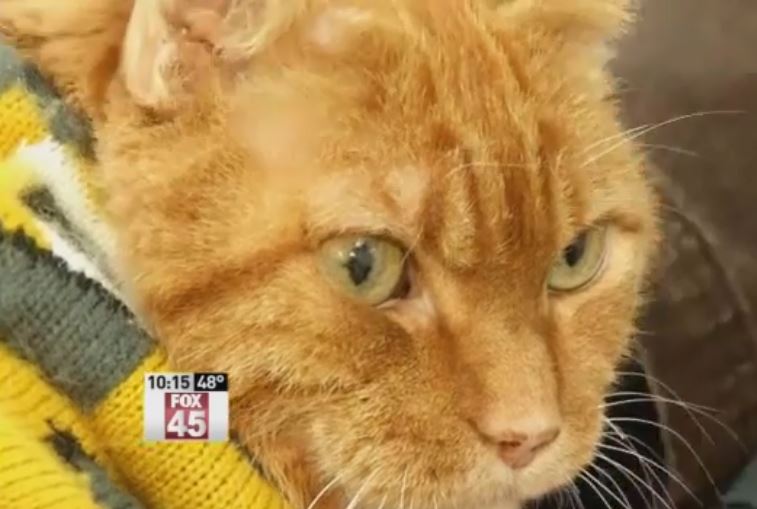 Tony the cat is both a hero and a survivor.

Tony, named for St. Anthony, saved his petmom, Robin Lawsons, by getting her attention when a fire broke out at their Fairborn, Ohio home one morning in January.

Robin felt terrible that while Tony saved her from the fire with his meows, she was not able to save him from getting severe burns. She heard his meows but was unable to find him amid the smoke and flames.

Fortunately, firefighters located Tony and brought him out of the home. His stomach and paws were on fire when he was found and he suffered third degree burns. He was taken to Towne and Country Animal Clinic to be treated for his burn injuries.

“This is the worst one that I’ve had that survived,” said Dr. David Kocher, Owner, Towne and Country Animal Clinic, when he spoke to WRGT-TV for a story toward the end of March. “He was huffing and puffing. It was, it was very close for a while.”

She credits Tony with saving her life and feels a special bond with her hero cat.

Robin was asleep in bed with her dog by her side as the apartment became engulfed in flames. She woke when she heard Tony meowing very strangely, almost like an alarm call.

“It wasn’t a meow meow, or an attitude yowl,” she said, “It was just a consistent meow.”

“I saw fire one to my left, one around the room, thick smoke, and I heard him, and I couldn’t, I couldn’t figure out where he was,” she said.

“Watching your apartment burn, and you know that you got a beloved animal you can’t get to,” Robin said, trailing off.

Telling of the moment when she knew Tony had been found, Robin said: “Man I heard that door go down and I heard someone yelling they got the cat! They got the cat!”

Not only was Tony on fire when he was found, he’d been overcome and wasn’t breathing.

Tony was revived by the story’s other heroes – the firefighters who rescued him and saved his life.

The clinic collected donations from the public to help pay for Tony’s medical care.

WRGT visited Robin and Tony at the clinic in late March for a feature on the hero cat.

Watch the WRGT-TV FOX 45 News report on the story: