Spanish veterinarian Carlos Rodríguez cared for a tiny kitten that was cruelly injured by some children and posted a heartfelt video response after the kitten passed away.

Dr. Rodriguez posted several videos with the little severely abused and injured kitten, who he named Broken, as he tried over several days to help the little victim to heal. Thousands of viewers followed the videos and showed their support for the kitten along the way.

Sadly, Broken had to euthanized only a week after she was rescued.

The veterinarian was both saddened and angered that the baby animal had its life stolen away by cruel children and spoke his mind on the matter while his grief was still very raw.

Dr. Rodríguez faces the camera directly as he speaks and is clearly upset that the kitten could not be saved and had to be euthanized. He has no sympathy for the abusers and deplores their cruelty, and, in his grief, he spreads the blame beyond the children involved.

Dr. Rodriguez uses blunt and common language in his video. If you are offended by curse words, you may not want to watch. The video is in Spanish with English subtitles.

The vet also wrote of some of his thoughts in his introduction to the video at YouTube.

We have included the video, as well as two earlier ones in the series on Broken. 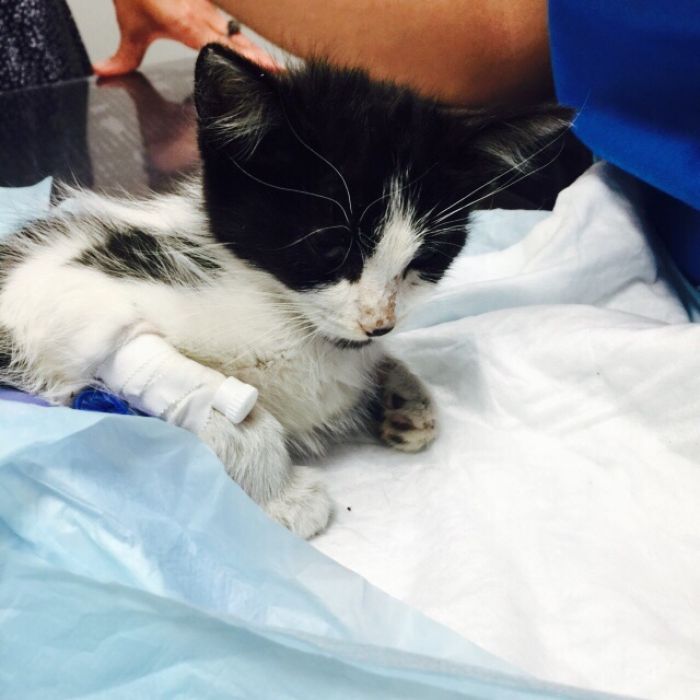 Carlos Rodríguez wrote on June 12 (roughly translated) as he set out to help Broken:

After 30 years in my profession and hundreds of animals, I have never encountered a complete rupture of abdominal wall.

After 30 years of my occupation and the hundreds of cases of abuse seen in my life, never would I have imagined that some children could have caused this injury to a helpless cat who was just two months old.

Today, on Friday June 12, 2015, we intervene urgently to help this kitten. It has already passed a first surgery, a tummy tuck to reconstruct the abdominal wall and now we will start the second, for a proximal femur fracture.

When just beginning to enjoy its life at two months old, the kitten met with a group of kids who decided to destroy it in the most vile and cruel way.

This bunch of small PSYCHOPATHS (yes, yes PSYCHOPATHS CAPS), have decided to “play” with her like a ball, throwing each other the little body into the air, kicking it.

Actually it was “lucky” a good woman came upon the abuse, stopped this atrocity and rescued the kitten. In this “field” of horror were the bodies of two other kittens from the same litter who perished in the brutal attack.

What comfort is there when some children who are supposed to be innocent performed such an act with a living being?

Does it have something to do with the “Spanish culture” in which an animal is abused to death and can be seen on public television during children’s time?

And like so many associations face day to day with these situations, we can not look away: Mascoteros Solidarios [veterinary practice] will take care of trying to save the life of this small animal

And while thousands of animals are mistreated and abandoned, the calientaescaños freedom of looking the other way are taken, dedicated to the contemplative life.

And those of us who love animals, we expect the desired and promised Animal Protection Act.

Long live Spain!
.
Here is the video, Broken has passed away (with Eng subtitles):

The first video with little Broken after he came to the vet for care:

Broken, third day: Dr. Rodríguez thanks everyone for their support shown to little Broken.

In just two months, this kitten has already suffered too much. Broken and his brothers were part of the cruel amusement of children who used them how to play ball. Broken, the only survivor to the macabre recreation of this group of young psychopaths, had to have emergency surgery on his abdomen and a broken femur.

One day, in what might have been any park, in any city, but not just any country, but in Spain, a group of children get ready to enjoy an afternoon of June. That same day, in the same park, in the same city of Spain, a litter of cats are on hand to play, run around, sniffing … Both groups, not so different from each other, coinciding in space and time. As expected, the natural thing would be that the group of human children would demonstrate some empathy for this group of little cats, and would treat them with carresses  … .Biophilia is an innate sense that intelligent species have, a sense that we co-exist with nature and with other life forms.

But when what happens is that the group decides to use the kittens as balls in their “field of Horrors” and are capable of kicking to death the defenseless living beings. What is happening? A woman came in time to save Broken, but the rest of his [or her] brothers were dead. Broken was referred to the Veterinary Center Mascotero of Rivas, where he had to be operated on as an emergency case. What at first seemed like a simple hernia proved to be a complete rupture of the abdominal wall. According to Carlos Rodriguez, the veterinarian who has intervened and the Chairman of Solidarity Mascoteros, in his 30 year career and hundreds of surgeries behind him has never seen a complete rupture of the abdominal wall. Furthermore Broken had a fractured femur.