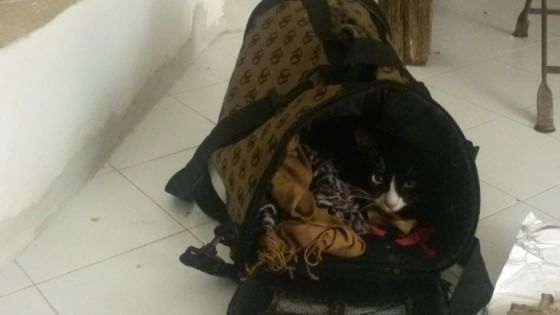 An act of kindness in the midst of the ongoing Mediterranean migrant crisis has brought solace to a woman who made the migrant’s rough journey from Africa to Europe with her beloved cat.

Lola accompanied her petmom, a young woman named Sama, across the Sudan desert to Libya before boarding a migrant boat to Italy.

Sama hid her beloved cat in a duffel bag as she set out on the search for a better life in Europe, and made it past border control agents and migrant traffickers with the pet hidden in her bag during the months long journey, before being rescued by a British patrol boat.

It looked like Sama would have to give up her cat when Lola was discovered on the Italian island of Lampedusa. Footage from the scene shows aid workers trying to calm the distraught woman after she disembarked and Lola was confiscated due to health and quarantine regulations. Lola had made the trip in violation of quarantine policies.

Local officials agreed to find a way to save Lola’s life and follow quarantine regulations, and they’ve promised to reunite her with her petmom, La Repubblica daily reported today.

Lampedusa mayor Giusy Nicolini and the island’s doctor Pietro Bartolo intervened to save Lola, who will undergo quarantine on Lampedusa.  The La Repubblica story indicated that Lola would likely otherwise have been thrown into the sea to drown.

“It’s the first time something like this has happened, the first time a cat has arrived in Lampedusa from the Libyan coast and by law she couldn’t be disembarked for health reasons,” Dr. Nicolini said.

“We don’t know if Lola has any diseases which could be contagious but in the end we saved her and found a solution.”

Raw video from the scene, with Sama’s anguished moments appealing for help to save her beloved cat: