Russell the cat has a new friend at Animal Emergency Hospital and Urgent Care, a motherless fawn called Darla who is temporarily in the hospital’s care before moving on to an organization that can prepare her to return to the wild.

It may have seemed that burn survivor Russell the cat’s story could not become more heartwarming, but it has. The widely beloved sweet and intrepid cat has amassed legions of well-wishers and supporters during a long recovery from severe burns sustained in a house fire at his North Carolina home in January of 2014. Russell has spent more than a year with his friends and caregivers at Animal Emergency Hospital and Urgent Care in Raleigh. He has made remarkable progress toward healing in that time but is not yet ready to return home to his family, who lost everything but their beloved kitty in the fire. Russell’s petmom, Mae Strickland, is finally back at home after a rebuilding/refurnishing process that took nearly a year.

Russell befriended Darla when she came to the hospital for care and feeding after she began hanging around a local resident’s yard with no mother in sight and even tried to nurse from the family’s dog.

WTVD 11 News has followed Russell’s recovery from the start and visited the hospital yesterday for the feature report seen below. We get to see a wonderfully nearly-healed Russell with Darla as we hear Darla’s story and get an update on Russell and his recovery.

While Russell is mostly healed now, there is still an issue with his feet. He is wearing a cone in the photo below to keep him from chewing his ankles following a procedure.

Darla the fawn is not the only animal to be befriended and comforted by Russell during a hospital stay, as can be seen in the photo at the bottom of this post.

And of course, Russell the man has been showing Darla the ropes and sharing his bed. (Russell has recently been thinking of chewing his still healing ankles, so he did have to get his e-collar put back on.)

Posted by Animal Emergency Hospital and Urgent Care on Monday, May 18, 2015

We have had a very busy week at the hospital; everyone around here is beat! Here’s to a calm and peaceful coming week for us all. 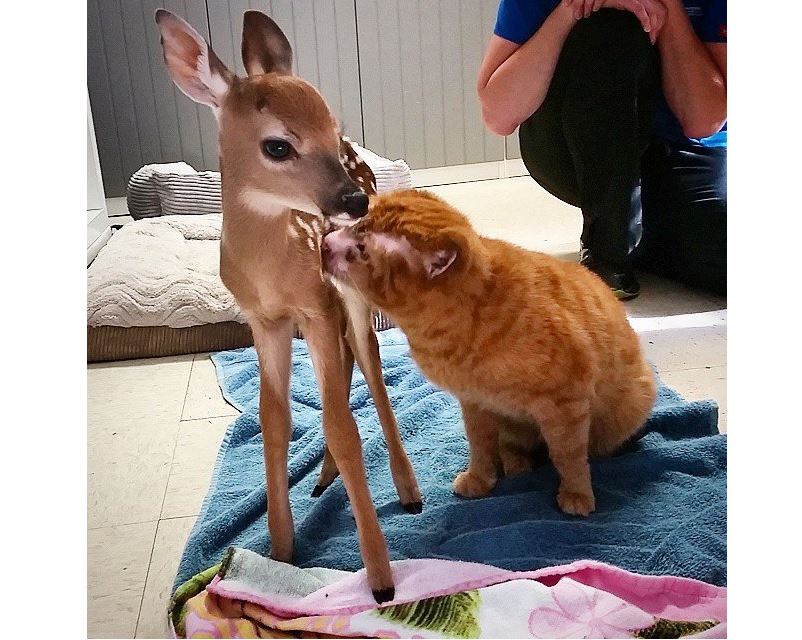