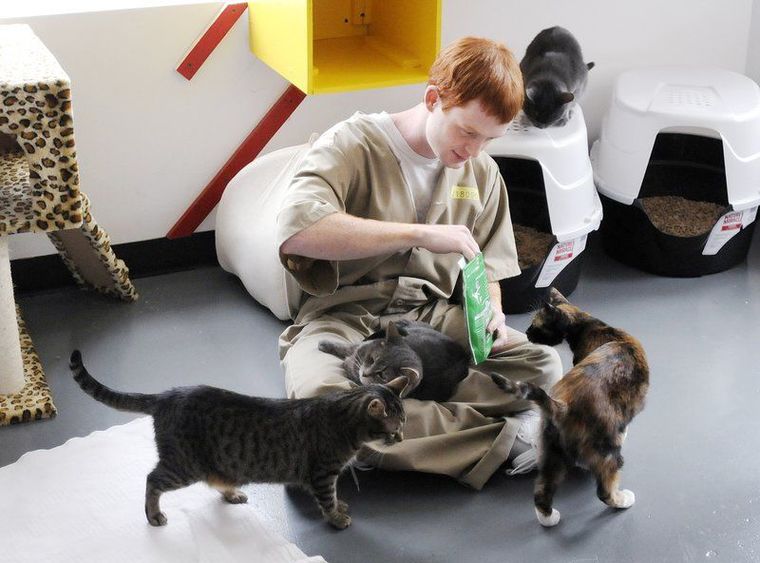 A dozen cats from the Animal Protection League in Anderson, Indiana are enjoying life at the Pendleton Correctional Facility, in Pendleton, where they have plenty of space in a home-like environment and and get lots of attention and care from prisoners.

The cats live in a specially revamped office space at the prison, and the cats and prisoners both benefit, as do prison staffers who drop by to visit the mini onsite sanctuary.

Maleah Stringer, director of the Animal Protection League, says placing the cats from her organization’s no-kill cat sanctuary into the beneficial environment should help them to become adopted. She noted in speaking with WISH Channel 8 news that the prisoners benefit from the calming effect the cats present and the opportunity to assume responsibility for their care.

“I’ve had offenders tell me when they got an animal, it was the first time they can remember they were allowing themselves to care about something, to love something. That’s a pretty powerful statement,” Ms. Stringer told Channel 8.

“No matter what your stress is, I always look forward to coming here for those nine hours. It takes a lot of stress away. It keeps my mind on good things, positive things, rather than just sitting in a cell for the majority of the time, pondering on things that may have happened to you. It’s definitely a stress reliever,” said prisoner Lamar Hall. “Love will change characteristics from anybody’s tortured past. That goes for animals and humans, really.”

“This program means a lot. It helps me to calm down, to relax,“ said offender Barry Matlock. “It gives me something to look forward to each and every day. It gives me a reason to strive to do better than I did yesterday, and to stay out of trouble.”

“The cats are getting lots of interaction with people. Lots of them have come from a bad situation, and so this makes them better with people, better in a home,” said Kara McEntire, Internal Affairs Secretary for the Pendleton Correctional Facility. 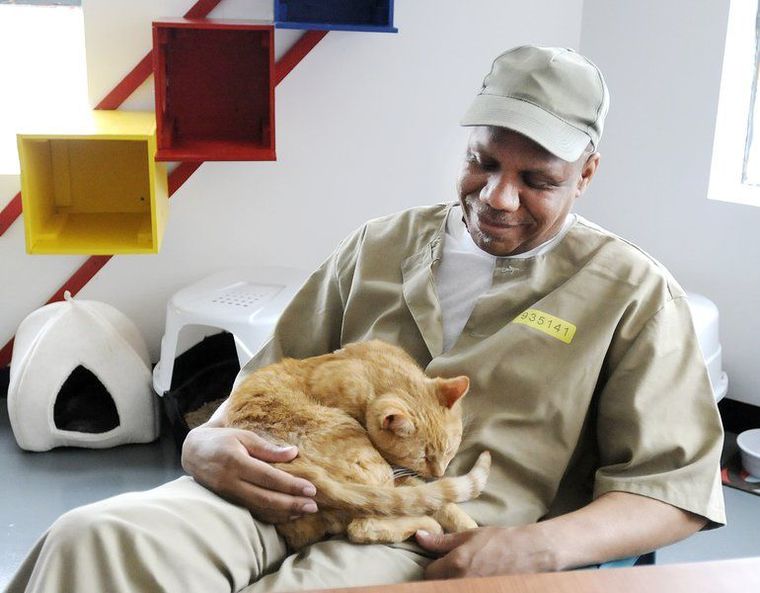 Prison staff and inmates have created a lovely cat sanctuary for 12 cats from the Animal Protection League. There are shelves where they can climb around the room lie in the sun and look down in their normal superiority on the rest of the world. We asked for donations and were overwhelmed by the generosity of our supporters with cat condos, toys and litter boxes. They have created a fairyland for cats.

Seven offenders, who have been carefully screened, are doing all aspects of care for the cats. There are two brackets and it is staffed seven days a week from 7 a.m. to 4:30 p.m. by the inmates overseen by staff. This is also a place for prison staff to come as a stress reliever.

This new program is in addition to Fido, 9 Lives and Saving Max at the Correctional Industrial Facility in Pendleton. This is a win-win for animals who have been thrown away by society, the offenders and prison staff.

“I have worked in six different prisons throughout the IDOC,” Knight said. “Three of those facilities have had some sort of animal program whether it be a rescue program or a structured service dog program. The benefits of having animals in a facility far outweigh any small issue that may arise.

“It is hard to explain to someone who has never worked in a facility how it totally changes the tone of the housing unit the animals are housed on. It changes staff and offenders alike. Animal programs teach offenders to become responsible for something else besides themselves. They have to give back, which is something most of them are not used to doing.

“The animals have an extremely calming effect on the entire population but especially the offenders who have an animal. These individuals rarely have any conduct issues because they know they will lose the animal if they do.”

When I first started the prison programs in 2006 there were people who were upset. They thought that we were giving pets to the offenders and thought it was wrong to reward them.

Shelters across the country are overwhelmed with homeless animals that have been thrown away by society. These programs save these animals’ lives. The offenders who fill our prisons are untapped manpower — why not put it to use?

The offenders reap the rewards as well; perhaps such programs can help them on their path to rehabilitation. 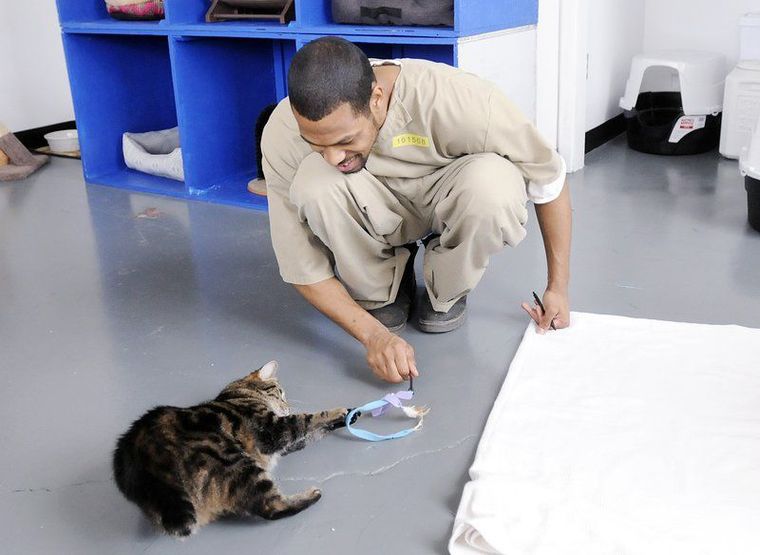 The Herald Bulletin also covered the story and spoke with prisoners and staff. Here are a few quotes from prisoners who participated in the story:

“It’s kind of ironic that these cats had to come to prison to have some freedom,” [prisoner] Barry Matlock, who is also quoted above,  said. “We deserve to be locked up, or at least I do, but these cats haven’t done anything wrong.”

“This is one of the best parts of my week,” Charles Barker, another prisoner, said. “It’s very therapeutic. After I did this a couple times, you spend your off days wishing you could go back.”

“At first the other guys were teasing me, like ‘you really just pet cats all day?’” Larry Welch said. “But now they’re like, ‘man, how do I sign up for that?’”

Michelle Rains, spokeswoman for the prison, and Kara McEntire both said the program is working out well so far.

Ms. Rains said there is a lot of interest in the program from the prisoners, and those who apply are chosen carefully and undergo lengthy interviews before being chosen to participate.

The prison also has a dog training program.

Watch the WISH channel 8 News report on the story: 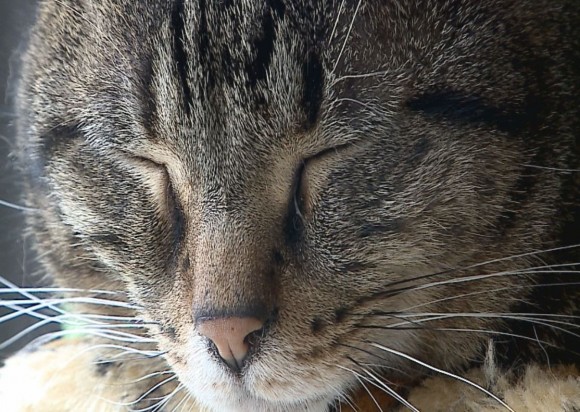