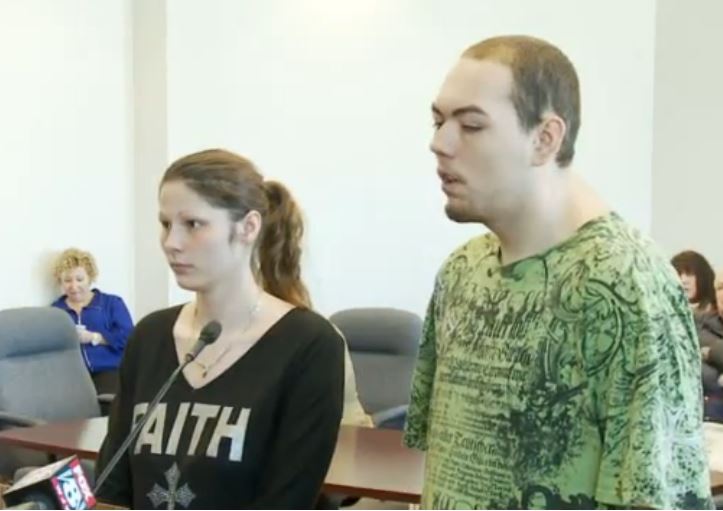 A man and woman seen on video tossing a pair of cats in a game of catch pleaded guilty to two counts each of misdemeanor animal cruelty before a municipal judge Wednesday.

Kaine Fowler and Melissa Candela were babysitting two young children in Ashtabula, Ohio on Monday, February 16 when they captured the action on video as they played catch with the household’s two cats, folding them into rounded shapes and roughly tossing them back and forth to one another within sight of the children. The pair look high on the video and the living room couch appears to be tipped over, also.

Fowler followed up on the incident by posting the video to his Facebook page, where it attracted a lot of attention, and not of the sort he might have wanted. The video was viewed and shared by appalled Facebook users and came to the attention of the Ashtabula Animal Protection League and the Ashtabula Animal Control Officer.

The video was posted at 3 p.m. Monday to Fowler’s Facebook page and within an hour the Ashtabula Police Department had received several calls about the video.

The following day, Ashtabula police and the city dog warden performed a welfare check at the home based on the complaints. The cats, who were not injured, were seized by the police and placed into foster care by the Ashtabula County Animal Protection League, despite their owner’s stated lack of knowledge or involvement in the incident. The tenant and owner of the cats told police he was the children’s father.

Fowler and Candela were arrested and charged that day, and appeared in Ashtabula Municipal Court yesterday, where they waived their right to an attorney and told visiting Judge Larry Allen it was a big mistake to make the video and post it online.

“It was a mistake. I wasn’t thinking at the moment,” Candela told the judge. “I really wish we could rerun time and not be able to do that, so we wouldn’t be going through any of this.”

The charges are first-degree misdemeanors and the pair face up to $1,000 in fines and six months in jail per charge.

Outside the court room, Fowler and Candela spoke with Fox 8 News.

“I apologize for all this drama over something that seemed so small at the time,” Fowler said. “Now, I don’t think it is.”

“I wasn’t thinking about the cats, and at first it seemed like it was simple. It didn’t seem like the cats were harmed at all,” Candela said, adding that she’s received death threats since the video went online.

“I’d like to know if they’re sincere in their regret or if they’re just saying that to avoid punishment,” Ashtabula City Solicitor Michael Franklin said. “The conduct is just so inane. I really don’t get it.”

“This affected me tremendously,” Marlene Murphy, of Ashtabula, said. “I was just totally heartbroken to see this, to see these poor cats being thrown back and forth like a football.”

In an earlier interview with WEWS NewsChannel 5, Fowler said: “I was drunk and high and just decided to play a little game with my friend and we tossed the cat back and forth and people blew the f**k up about it.”

“I was already f***ed up before I went to babysit,” he said.

Not surprisingly, Fowler said he regretted uploading the video to the internet.

Fowler and Candela have not been charged with child endangerment despite Franklin saying last week that charges were being considered.