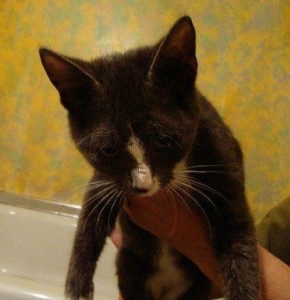 To many families trying to battle fleas, finding the cheapest and strongest product on the market makes sense, especially on a limited income.

However, such products are often marketed deceptively and are nearly impossible to use safely. Tiny Timmy’s story is only one example of the permanent damage these products cause to many cats daily.

Claudia Tietze, Tiny Timmy’s owner, spoke with Life with Cats telling us about Tiny Timmy’s journey and the new product she has created to address this issue. Claudia is raising money so that she can meet some of the expensive requirements in order to finally make the product widely available.

What started you on this journey? Could you tell me a bit about Tiny Timmy?

“What led me on this journey was rescuing Timmy in September, 2009 and adopting him in the middle of a toxic reaction to flea and tick medication…I was rehoming a litter of cats and I came upon this ad that said ‘disabled kitty-$100’. For some reason, I don’t even know why, I saw this and thought…’maybe this is a cat that I could help and rehome’. I really didn’t want any more cats (to keep). Initially, we had some emails back and forth and this little girl, about 14 years old, started doing the typing and would say stuff like ‘he’s a really cute cat, or he’s really good.’ One day, she contacted me and said her mother was going to put him out in the forested area if no one came to get him and she talked her mother into giving him for free. So, I met them to take him.

Eight people ended up in the parking lot where I was to meet them, along with a vicious dog…It was very creepy and intimidating. This was the little girl’s family… It was the most surreal, John Lynch moment of my life and I have lived in some pretty hairy places…I pride myself in that I can pretty much get along with everyone.

And I wanted to know a bit more about Timmy. They were all edgy at first and then became more talkative. They realized that I wasn’t going to just judge them…What I witnessed while there is that Timmy was only cared for by that little girl and the only person with a real conscience in that family was the little girl. The others thought it was funny that Timmy was “wobbly” and even had a special word for their dog to chase Timmy…

Then they brought their nephew who was about 5 years old and he was supposedly really attached to Timmy. He was just telling me how funny Timmy was and thought it was entertaining when Timmy would take off in a panic until running into something. He started to bang on the tarmac right behind Timmy, to get him to run and when he didn’t move, the boy pushed Timmy onto the ground like a broken Tonka truck to force him to run…I took Timmy right then to the car.

I asked them if I needed to be careful about fleas…I didn’t know much about these products at the time… I would just bathe the cats with a flea shampoo…So, the family said, ‘well we have this great stuff we spray on him and it works-no fleas! It’s wonderful!’ The little girl whispered in her mom’s ear and went and got this bottle and, in this case, it was Sergeant’s Flea and Tick spray for cats…and they said, ‘I can’t believe it’s only $2 at Wal-Mart!’

I also asked to see his vet records and they admitted that they never took him.  I thought that maybe, because of their treatment of him, that he had been hurt or something was physically wrong with him.
I had the phone number of the girl, so I texted her a bit. On the way home, my partner and I were feeling a bit nauseous but we weren’t sure if it was because of what we had witnessed. Also, for the whole way, Tiny Timmy didn’t meow, look around, or anything. I saw he had this sticky stuff on him but I didn’t associate it with the spray.

When we got home I flea combed him and pulled off about 30 fleas. I then bathed him and there were about 60 dead fleas in the bath. I combed him again and just filled a toilet with the fleas. And so, all in all, we pulled over 350 fleas off of his tiny limp body!”

Wow! But it was supposed to repel the fleas, right? And they thought it was working!

“What happened is that they had sprayed it on the outside and the fleas had just run closer to his skin and were multiplying there.

See, the directions on this stuff are impossible to follow safely…They say to spray for 1 second per pound of weight but it’s a pump spray so you can’t spray for a second or seconds. It also says to avoid certain body parts and yourself, yet this is absolutely impossible, as you are also supposed to hold it 12-18 inches from the body, causing the spray to fan outward, covering more area.”

So, what did you do? 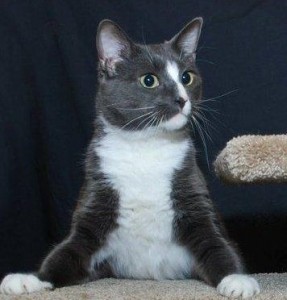 “It was pretty obvious something was very wrong with him…He didn’t have the strength to hold up his head. He urgently needed a vet. So, we packed him in the car and drove him over there. The vet checked him out and said this is a classic reaction to flea and tick products. She said there is not a lot we can do. They didn’t have the capacity to give him 24/7 care…The vet said our only options were to take him to the emergency vet or to take him home and if he needs it then to take to the emergency vet. So, I asked what the emergency vet would do and the vet said basically, if he has a seizure, they would handle it and if needed, they would euthanize…So, we brought him home thinking we might be bringing him home to die but didn’t want him to die alone.”

Did he continue to struggle as he improved?

“Yes. One time I was watching him go to the bathroom…In the other place, the way he had to use the litterbox was by flipping from a bed to a high walled litter box that he then couldn’t get out of…So, he had some toilet anxiety. He wanted to use it but would start to get really anxious.

He would go to the bathroom and I had this shallow little litter box. He would stiffen up like a board and flip over backwards. I worried he was going to hurt his spine so I created a bumper with insulation which made me feel better that he wasn’t just hitting his spine on the hard edge…

Once, I told him that if he needed to go, it would be okay and he wouldn’t be alone, but if he wanted to fight, I would fight with him…He just looked at me with this spark in his eyes. He had a will to survive.

We also had to limit his play with other kitties because he would get so excited and then crash…I set up a little obstacle course for him which had a bit of leaping and crawling and climbing and so we got to the point where he got about 30 minutes of play, then an hour and increasingly more…

In the first year, we took him to several vets of varying specializations…they ruled out CH and said that it is definitely the flea and tick product.

Overall, he is now a happy, healthy cat, though he has kidney issues because of his exposure…”

What is the industry doing about this & are vets speaking out on this or trying to petition the industry?

“No, though anyone who works in a vet office will say they see so many of these cases. Some will come out and say stuff but most just quietly say something to their clients about not using it…

There are also issues with the stuff you get from the vets. The difference is that, if you go to the grocery store and buy a product, because of the economic disparity, a lot of people buy them because they don’t have the money and they are the least likely to recognize it or report it…If you use wrong doses, etc. something can happen…The vet will make sure you have the right species or right weight and even show you how to use it…

Industry tries to make it always seems like something the owner did…and they have been good at pummeling into the consciousness of vets and the public…The EPA has said you shouldn’t use these products every month and only when you have an outbreak after other things have failed. Also, fleas are becoming immune to these products.” 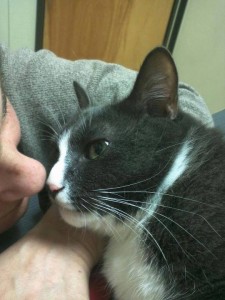 So, you developed a product in response to this?

“So, since I started learning about these things with Timmy, I started a website that deals with it all (www.tinytimmy.org ). Every year, Aundria Arlandson, who lost her cat to a similar reaction, and I have gone to Washington, D.C., funded by Timmy’s supporters. We have gone to the EPA to meet with directors of these departments…The sub-division of the EPA that regulates flea and tick products is the Office of Pesticide Products…and we have done that every year.

At some point, I felt that I also needed to create a soap that is non-toxic, natural and safe for cats…So, I did a bunch of research and looked at scientific papers and contacted my friend Johnna.  She and her husband own a small company here called Oregon Rain Soap and she helped me take my recipe and tweak it.  They are the ones that actually hand make the soap.

My goal, at first, since I was still struggling with health issues, was to sell enough to give away some. I ended up giving away over 1,000 bars to rescues and people in need…Now, I have just come off off 25 months of antibiotics and have more energy to be able to put into the product . We are changing the base recipe and will be able to put it out there in retail stores. The previous name was Tiny Timmy’s Sudz and it is now called Dirty Fleas Soap…

Our goal is to get it into retailers all over…We know that it sells from previous experience, though none of it was in great volumes then. Now we have a distributor even in Europe who is interested…We have a lot of interest in several stores…Some stores require business licensing, though, and we also have some extra hoops to jump through because of the claims we make-that it kills fleas, ticks, and mosquitoes, which puts the soap in a different category than regular ‘clean your body’ soap. We also have to fill out regulatory paperwork for any country we export to.

So, that’s why we are doing the Indiegogo campaign, so we can actually do this on a larger scale. The campaign ends on May 12th, which is Timmy’s birthday, at 12:21pm Pacific Time…We still have about $6,000 to raise!”