Earlier this year, a cat named Spotty, who had been in the care of Red Paw following a fire, was returned home to his petmom. Our post from January 19, Spotty Cat Goes Home, includes the touching video of his homecoming.

Here is Spotty’s story, as told by his foster caregiver.

The following post is by Red Paw Emergency Relief Team Board Member Mary Kury, who has fostered several Red Paw animals for the organization and adopted DeeDee, a Pit Bull displaced by a fire in November 2011 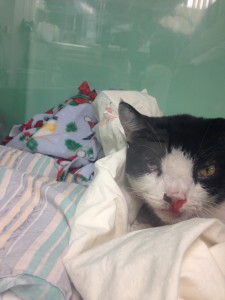 Although he was reunited with his owners over a month ago, whenever I look at my kitchen chair, I think of Spotty (Cat) Cow. Some would wonder, why would a chair remind me of a cat?? Well, it’s due to the fact I was sitting in that chair the morning I took a call from Red Paw founder Jen Leary, telling me that a feline who was involved in a house fire several days prior had run out of the burning home, gone missing and then showed up at the University of Pennsylvania Emergency Veterinary Hospital after being hit by a car.

Thankfully, all the cards lined up in Spotty’s favor; a good samaritan brought him in following the accident and since the staff at PennVet follow the Red Paw Emergency Relief Team Facebook page, they had read about Spotty’s story and knew he had been missing. The tech said she smelled smoke on him, knew he had been hit by the car in the same area as the fire and called Jen immediately! As she listed his known injuries at that time, a feeling of dread came over me, as I knew already what I was likely to answer when and if she asked ‘what should we do?’ Skull fractures, broken jaw, dental extractions, eye injury….aside from the cost of all these issues, I knew this poor cat was going to need to endure multiple procedures, painful recoveries and a lot of aftercare. His owners had other pets, one cat still missing (who miraculously Red Paw found in the burnt out, destroyed building a few days later completely fine!), health issues of their own…..it was a lot to take in. My personal opinion was humane euthanasia was likely the best option for him. There were two items I hadn’t yet considered….the first being the overwhelming support from social media and Red Paw’s ability to fundraise, and second, the black and white cat’s will to live!! During Jen’s second call with an update, she told me how Spotty’s owner had to climb onto her porch roof from the second floor window to escape the fire and that at one point she had grabbed Spotty to take him out the window with her, but she lost her balance and had to put him down to steady herself and he ran back into the apt. Somehow he made it down the stairs and ran out past the firefighters as they were going in! Jen told me how guilty his owner felt and how she’d do anything to make it up to him! At this point I said “I’ll foster him.” It was almost two years since I’d first said those words to her and Red Paw and I’ve never regretted them for a moment. I picked Spotty up from Penn after his initial treatment of several tooth extractions, his jaw wired and his left eye sutured closed – that was to prevent a blood clot from forming in the socket and displacing the eyeball. I am a certified veterinary technician, so I was prepared for what his face would look like – it was one only a ‘foster’ mom could love….but I wasn’t prepared for the pitiful yowl that grabbed my heart. Again, I doubted and thought, what have we done? It amazes me to this day that with all the medications I had to get in him, the force feedings that didn’t work well enough (he refused to let me get enough nourishment in and in the best interests of healing, eventually a feeding tube was placed), cleaning the surgery sites, etc. that this amazing cat scratched me just once….and it was likely a mistake he even did that!

The only frustrating thing this wonderful cat did over the many weeks of recovery was his refusal to eat!! Even after his jaw healed, sutures removed, more teeth taken out, his alignment checked and he was offered every flavor/brand/form of cat food out there – he refused them all. It’s a good thing I have other felines happy to eat his leftovers! As the weeks went by, I started to stress about the length of time the tube was in place. We tried appetite stimulants known to work on other cats, but he was just that stubborn! Ironically, the same stubbornness that I admired so much as he willed himself to live was now haunting me, as he would sniff and avert his head at fresh food and simply curl up in bed wait to be fed through the tube. As Christmas approached (his accident took place right before Halloween) we had another appointment at PennVet and I asked his brilliant, caring vet, Dr. Lisa Fink if I could attempt a ‘tough love’ strategy and cut back the amount and frequency of his feedings….although I knew it was standard in similar cases, I was filled with anxiety. Everyone on Facebook was asking the same question “How is Spotty, is he eating?” When I finally coaxed him to eat a crunchy cat treat, my video had hundreds of ‘likes’! I cried the next day when he refused those same treats….and several days later, cried for joy when I woke up to a half-eaten dish of Halo! It was the Christmas miracle we were all hoping for! About a week later, as Jen looked on, Dr. Fink cut those final sutures and pulled out that tube. Spotty hasn’t stopped eating Halo since and the scale shows the results, as does his shiny fur growing back in all the places where he was shaved for catheters and surgical procedures. 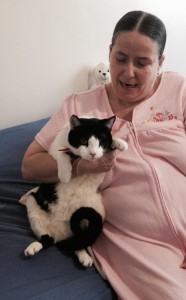 As a foster, I have found closure in reuniting the animals with their owners, and it was with mixed emotions I drove Spotty home that January day. I knew his owners loved him so much, but he meant so much to so many that the pressure was on for me to convey how much everyone contributed to his recovery and how much I loved him and would miss him. I shouldn’t have given that a second thought…..Ruth was THE most appreciative Red Paw client I’d met, told us she prayed for him, his supporters, for Jen and his caregivers! She even thanked Red Paw first before reconsidering and saying ‘No, God first, then Red Paw’! In the video, I appear as if I don’t want to hand him over, but it was because she was so emotional, I didn’t want her to be overwhelmed by her now slightly ‘pudgy’ beloved cat!

In hindsight, I could kick myself for thinking the odds stacked against this cat were too great, if I’d only met him first…..and well, if it weren’t for all the unbelievable Red Paw supporters, this story wouldn’t have ended happily ever after! I thank everyone who donated to Spotty Cow and all the other animals – please know every penny was/is worth it!

.
From the Red Paw website’s ‘About’ section:

Red Paw has been a work in progress for many years and a direct result of founder Jennifer Leary’s (Philadelphia Fire Fighter and Red Cross Emergency Responder) experiences on the fire ground — time and time again, pets have been left with no organization to provide emergency assistance or care in the event of a fire.

Two specific incidents sparked Red Paw’s birth. A few years ago, a two alarm fire in Center City resulted in the death of two dogs and a cat because there was not a procedure in place to help them. Responding with the Red Cross, Leary was there and saw the owners carrying the dogs in their arms screaming for help, but no one was there to help them. Leary then used her personal vehicle to rush them to Penn Veterinary Hospital (while the owners were giving them oxygen with equipment borrowed from a medic unit) where they later died.

The second incident occurred in January 2011 at a three alarm fire at an apartment complex in West Philly. Cats were being taken out of the building in laundry baskets and rushed to the shelter without crates or emergency vet care. Dozens of cats were trapped in the building for weeks afterwards.

Shortly after that fire, Leary brought her proposal for Red Paw to the American Red Cross — to work in conjunction with their responders when there are pets on scene. Eight months later Red Paw was born. In 2013 Red Paw was added to the City of Philadelphia’s Emergency Response Plan. The humans have the fire department and the Red Cross to provide emergency assistance and now their pets have Red Paw!
.
.
.