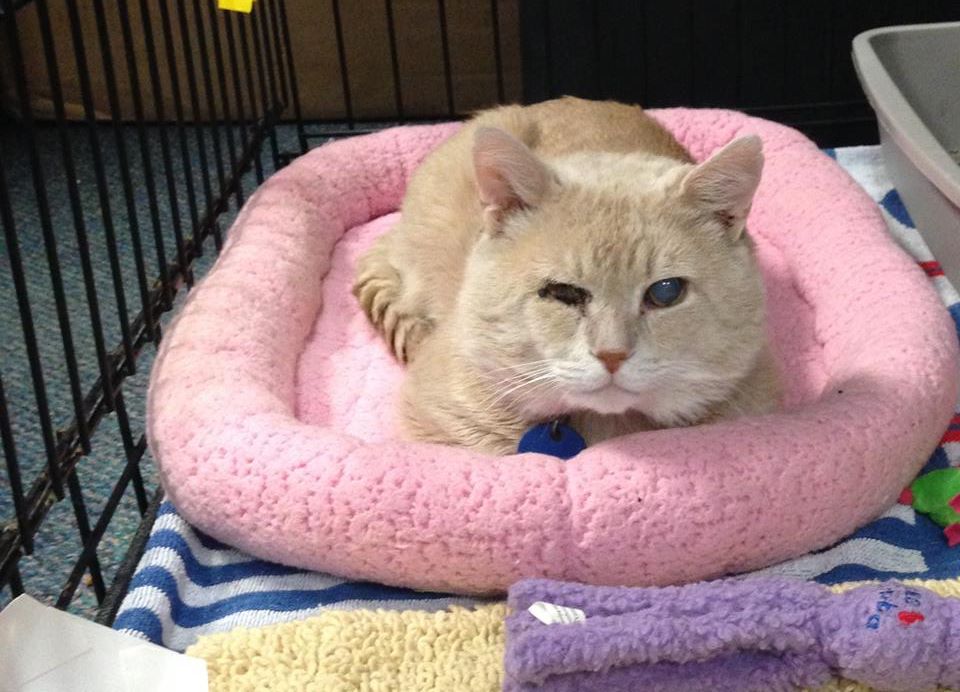 A handsome buff colored blind tabby cat brought in to an Arlington, VA shelter as a stray two weeks ago is recovering from surgery to remove an eye.  Staff were shocked to discover that the basically healthy cat was riddled with BB shot, which he may have carried with him for quite some time.

Animal Welfare League of Arlington, of Arlington, VA,  writes at their website’s  CAT Capital Campaign page:  “On January 18 an area resident found Arrow near Ballston Mall and brought him to AWLA where our shelter veterinarian immediately found cause for concern.  Arrow was blind, with his right eye shrunken and a dilated pupil and lens opacity in his left eye. The result of his x-rays were even more shocking.  Arrow had at least 20 BB pellets in his head alone with more than 60 lodged throughout his body.  Through AWLA’s “Care and Transform” program, diagnostic work and medical care continued.  Arrow was neutered, his painful, badly damaged right eye was removed, and a dental cleaning with extractions was performed.”

Shelter staff say Arrow may have been living with with the BB pellets for a long time. While the pellets may have caused or contributed to the problems with Arrow’s eyes, he was lucky that none of them penetrated his organs. His vets will leave most of the BBs where they are.

“He has the mass of the pellets in his head and the rest just riddled throughout his body from both sides right down to his legs,” Charnita Fox, an animal care manager at AWLA, told WUSA News.

Ms. Fox continued: “He maneuvers well. he gets used to you – at first he’s a little scared with the initial touch but after a while he loves it.”

“He purrs, he cuddles, he’s sweet, he looks great, he’s friendly, he’s not angry at people.”

The very friendly and forgiving light buff tabby cat is recovering well. His right eye socket is stitched up as he heals from surgery to remove the eye.

AWLA wrote at their Facebook page yesterday: “This sweet boy is now recovering in our offices being closely watched by our medical team. We are hoping for his full recovery and eventual adoption!”

Today AWLA said they expect Arrow to be listed for adoption at their website soon.

“This is out and out right cruelty,” said Neil Trent, President and CEO of the shelter, in the feature at WUSA. “What sort of personality does that?”

AWLA says that the person who shot Arrow will be prosecuted if they are identified and found.