.
A kitten in need of life-saving surgery when he was rescued last month after being found tethered to the wall of his home by a shoelace has overcome the odds and recovered, and has found a loving forever home with his foster caregiver.

MSPCA (Massachusetts Society for the Prevention of Cruelty to Animals)-Nevins Farm and Angell Animal Medical Center staff weren’t sure Marte would survive after he was taken from the Lawrence, MA home where a city animal control officer found him tied to the wall by his neck on January 24.

Marte had ingested a piece of string weeks earlier and his condition had deteriorated as the string caused worsening internal damage. Animal control was tipped off to the  dangerously weakened and injured kitten by a veterinarian who had been visited by the kitten’s owner, Billy Benavides. The man brought Marte to Johnson’s Veterinary Hospital in Lawrence on January 16, where x-rays showed an obstruction in his GI tract. Benavides reportedly became concerned upon learning the cost of surgery and blurted out upon leaving that maybe he’d kick the string out of the kitten.

Dr. April Koich, who examined Marte at Johnson’s Veterinary Hospital, told NECN, “Waiting on something like that is very risky, they are going to be in continued pain, if that object is truly stuck, dehydration and vomiting is something that can be lethal.”

Nevins Farm director Mike Keiley was shocked to see Marte’s condition.  “This cat had clearly gone weeks with this string lodged in his body, creating untold damage to his insides,” he said. “The fact that he was tied by his neck only added to his misery.”

Marte had been vomiting and was dehydrated, thin and weak. He had been tied to the wall because his owner didn’t want him vomiting all over the place. The string was lodged beneath his tongue, went down his throat, and was wrapped around his intestines.

Marte was taken to the MSPCA’s nearby Nevins Farm center in Methuen and had extensive surgery at Angell Animal Medical Center in Boston two days later.

When Marte arrived at Angell, he was evaluated by surgeon Andrew Goodman, who determined that the string had made several punctures in the kitten’s intestines, leading to infection and sepsis. Dr. Goodman figured that Marte had only a 30 percent chance of survival if he had the surgery, but had no chance without it.

Dr. Goodman had to remove about half of Marte’s intestines and re-route his gall bladder.

MSPCA at Nevins Farm made the happy announcement at Facebook today that  Marte was not only recovering well, but he had found his forever home, writing: “If Marte recovered, he was to return to Nevins to be made available for adoption, but that was not to be. Marte’s foster mother fell in love with him and decided that she would adopt him, even if he was unable to recover and required hospice. But recover he has, and Marte now has a home that will love him to the moon and back for the rest of his life; making up for his rough start in life and brush with death.”

.
.
NECN covered the story back on February 4: 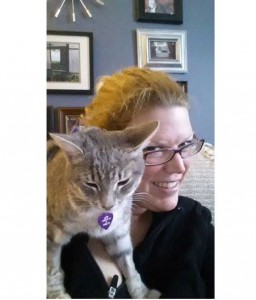