Stockings was born with crippling backwards facing and bent hind legs. Chicago’s Tree House Humane Society saved the young kitten’s life by taking him in and got him corrective surgery. Now Stockings has found his forever home with the vet tech who fostered him.

The story of Stockings is one of hope for a kitten born with a severe birth defect which could have cost him his life. Born unable to walk or even stand, Little Stockings was found at only a few weeks old, living in a suspected hoarding situation. Thankfully, a kind person brought him to Tree House. When he first arrived, we were taken a back by what we saw. Stockings’ hind legs were excessively extended backwards. The hyperextension was so severe that it was as if his feet had been put on backwards. Additionally, his legs were fully turned inward and fixed in a ‘W’ position. This little kitten was unable to stand or even extend his hind legs. However, as is so common in cats who are born with disabilities, his deformity had not deterred him. Stockings had a will and found a way, and we watched as this little cat scooted around on his hind hocks (or ankles).

We were immediately drawn in by Stockings’ incredible personality and gentle nature. He has a way of looking up at you, with intense blue eyes, that is infectious. He is an incredibly attentive kitten and lights up when someone approaches. He leans his whole body forward as if yearning to be noticed with an undemanding, yet earnest look of anticipation. While Stockings’ legs were certainly a concern, first and foremost was his overall health. When he arrived, Stockings was underweight and suffering from the beginnings of an upper respiratory infection. Remarkably, however, there were no sores or calluses on his hocks. Given the way he scooted on his hind legs, it would not have taken long before wounds would have developed on his hocks. Untreated, it is likely his wounds would have quickly become infected. Stockings was slow to gain weight and remained in our clinic to be monitored. We treated him for his oncoming cold and soon his health began to stabilize. We then turned our attention to his malformed legs. Given the severity of his deformity, and the uncertainty of treatment outcomes, a traditional shelter would most likely have viewed Stockings as a lost cause and simply euthanized him. We, however, believe that Stockings truly deserves to have a chance at a long and happy life.

Stockings’ deformity presented a unique challenge, and it was uncertain what could be done for him. Tree House Director of Veterinary Services, Dr. Lynda Ewald, consulted with an orthopedic specialist and, after consideration, there was an idea. Using a surgical procedure, Stockings’ tendons would be cut. This would then allow his legs to be extended, i.e. straightened, and his hocks to be placed in the proper, flexed position. A splint would then be placed in the hopes that his legs would heal in an extended and straightened position. Additionally, Stockings’ feet would be fused in proper alignment. It was unclear if Stockings would be able to walk or even stand, but we wanted to try. Stockings went in for his first surgery in early October. Initially, he suffered from some post-operative swelling and soreness. Stockings’ cast was also causing him pain and was replaced to help reduce his discomfort as he continued his recovery. Soon after, Stockings underwent his second surgery to help repair his other leg. Fortunately for Stockings, we were able to place him in foster care with a foster mom who is a veterinary technician to enable him to recover in the comfort of a home setting and with round-the-clock expert care.

We are pleased to share that Stockings’ progress has been truly remarkable. His left leg responded well, and it is unbelievable to watch him wriggle and work to stand. He can now fully extend his left leg. Initially, Stockings’ right leg did not respond as well, and he underwent two additional surgeries. Stockings has blossomed into a rambunctious, lively, and energetic kitten. While he shares his foster home with two dogs, he has quickly learned how to take charge of the household. He wobbles and topples as he works to navigate but is quickly learning how to adjust to his new legs. Seemingly, he has no fear as he leaps toward a sparkle toy and tosses about tirelessly. While Stockings will not have the same range of motion or mobility as other cats, he is an unbelievably resilient and determined little kitten and has gained incredible dexterity in his front legs which helps compensate for the limitations he has in his hind quarters. Stockings can now stand on his hind legs and pulls himself up onto the couch with ease. He eagerly races across the room, not wanting to let the dogs get too far ahead. It is incredible to see him take a few, tentative steps as he learns to navigate on his new legs.

There are still unknowns for Stockings’ future: How much mobility and strength will he gain in his legs? Will he need more surgery or treatments to help his back legs remain stable? We can’t answer all of these questions just yet, but given the way things have gone so far, we are very hopeful!

We are also pleased to share that Stockings was recently adopted (his foster mom fell in love), and Stockings will be home for the holidays. We are thrilled that this little cat has a bright future!

WLS Channel 7 Chicago did a feature on Stockings and spoke with his orthopedic veterinarian Dr. Steve Neihaus, who frequently helps Tree House cats, about the experimental surgery he performed on Stockings beginning when the kitten was 8 weeks old.

“We knew it was risky. We knew there were no guarantees it would work,” Dr. Schlueter told Channel 7. “We went forward with surgery knowing we could never make him normal. Our goal was to make his feet functional so he could live a happy, pain-free life.”

After four procedures over the course of several weeks, Stockings’ feet were realigned and he was able to walk, run and play without being in pain.

Stockings was adopted by Priscilla Cherry, a vet tech with Dr. Neihaus’ Chicago Veterinary Emergency and Specialty Center clinic, who fostered the kitten during his recuperation from his surgeries.

Ms. Cherry told Channel 7:  “I saw him trying to grab people through the bars of his kennel without a care about his malformed legs, and I knew he was for me.” 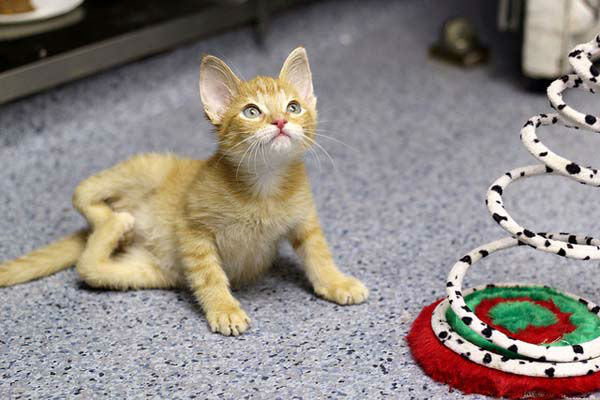 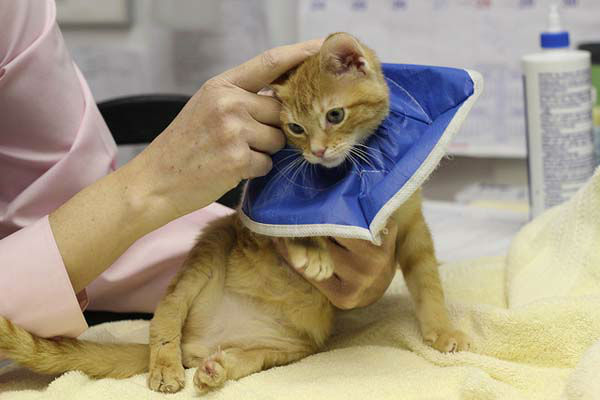 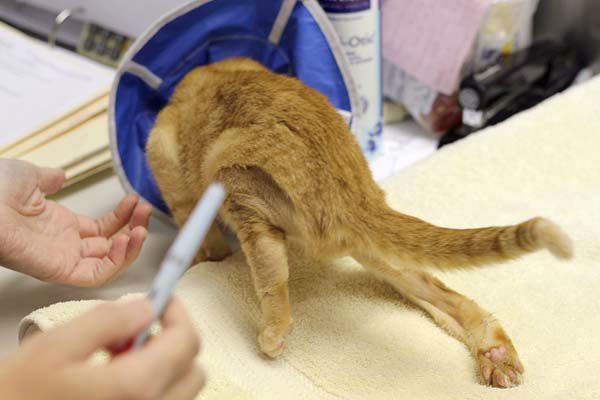 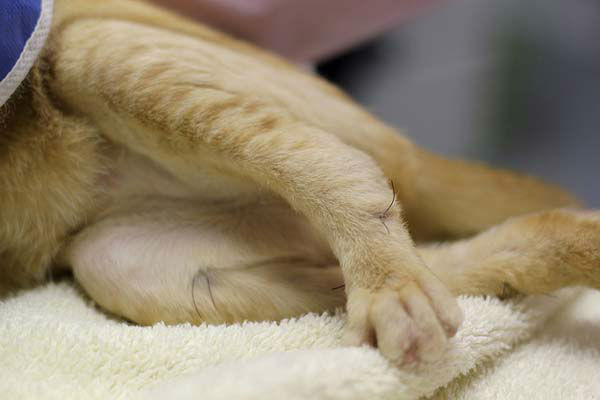